Oh - I'm so torn on this one! The Lobster Kings, by Alexi Zentner

hardcover --  my thanks to the publishers and to LibraryThing


“The ocean gave us our life and it also took life away.”

The Lobster Kings is set on Loosewood Island, situated between the eastern Canadian coast and the state of Maine, its jurisdiction claimed by both Canada and the United States.  It's been the home of the Kings family since the 1700s ever since Brumfitt Kings, who came to the island with an Irish fishing fleet each year,  volunteered to remain on the island to take care of the companies' drying racks and "keep a permanent encampment" for the others.  When he wasn't working "seeing to company business," and "other chores of survival," Brumwitt spent his time drawing. He stayed alone on the island, happy in its isolation, for three years; the fourth year the men on the island brought in wives from Ireland and England.  He himself did not marry until eight years into his permanent stay on Loosewood Island, and legend has it that his wife came from the sea.  Brumfitt noted the details of her arrival in his journal, along with the dowry that she brought to him:

"his children, and his children's children to each and every generation, would carry a blessing: the bounty of the sea."

Brumfitt was not just the progenitor of the Kings Family; he was also an artist whose paintings are famous.    The Kings have been harvesting the ocean ever since Brumfitt's time, and have been very lucky. It seems that the legendary dowry has fulfilled its promise, generation after generation, but also according to legend, there is a price to be paid for the promise of the bounty of the sea -- and it has been exacted in each generation with a first-born son.    Cordelia Kings, the narrator of this story, spent her childhood reading Brumfitt's journals and working with her father lobster fishing on his boat. The lobster-fishing community on Loosewood Island is very closely knit, and looks to Woody for leadership when something comes up.  Cordelia, now an adult, is the "heir to the throne" of the Kings family lineage and to the family's position on the island. And something does come up: mainland  James Harbor fishermen are moving out of their own lobster-fishing areas and have moved into the waters off of Loosewood Island, breaking an unwritten but long-held  code that has existed between the two areas about fishing territory. Not only are they putting their traps in the island's waters, but some of the James Harbor contingent are bringing their meth trade into island waters and onto the island as well.  With Woody sort of sidelined with health and other issues, Cordelia steps in, trying to move into her role as the heir to deal with the situation. 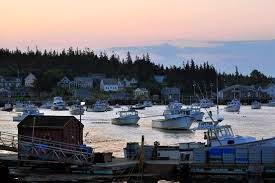 There is so much about this novel to like - but it does have its down side, which is why my reaction is sort of muddled here.  I was very much taken with the family history being so prevalent throughout the story. Cordelia, for example, often turns to Brumwitt's paintings that she's so carefully studied -- Woody once told her that the "history and the future" of the family were to be found in Brumfitt's paintings; he'd "painted all of the memories of Loosewood Island, even the ones that hadn't happened yet."  At one point in the story, she even references a painting during a radio call for help to describe a situation she doesn't want everyone listening to know about.  This same technique is used by the author at various important points where the paintings  mirror what's happening,  helping to  move the action along so that he doesn't have to spend a lot of time describing what's going on. I also liked how he  incorporates the tourists who have at some point decided to stay on the island and who have set up a community of artists, and the "Brumfitt walks" that people can take.  Another positive aspect of this novel is the closeness of this community of  long-time island regulars who now find themselves being invaded by contemporary  issues that are encroaching upon the way things have always been on the island -- the modern meth trade for easy money that substitutes for the traditional hard-work ethic, the arrogance of the seasonal tourists who build their houses and complain about the lobster boats blighting their ocean view, lobster poaching, and outsider views on lobster fishing that pits money against sustainability.  Then there are the characters in the Kings family. The sisters have their spats, which is realistic;  I was most especially drawn to Woody for his ability to reign in his daughter when she got too uppity and gung-ho, and to Cordelia for sticking up for herself, for the value she places on family history and tradition, and because as scrappy as she is, she doesn't always come across simply as some one-sided tough-as-nails person who captains her own lobster boat.

Now for my  issues:  In the first part of the book, where the author introduces the family's mystical lore,  the island's history,  and the Kings girls during their childhood,  the writing is just so good, flowing very nicely and sucking me right into the story.  I remember thinking at page 84 that if the rest of the book is written like this,  I knew I was going to love it. Alas -  we not too much later take a turn into sheer melodrama, centering on  the drug dealer who came back to the island after his father died. When some of the locals get wind that he's on the island, not fishing but dealing meth, they take care of him in their own way.   Add to this  a murder subplot involving a later showdown at sea,  and the combination of the these scenes left me surprised at how much the book's tone had changed and had become reminiscent of  a western movie or modern-day vigilante flick. The change highlighted for me much overall inconsistency in the writing.  And while I was really into the Kings' family relationship, the ending got plain sappy.  Plus, let's get real: the whole King Lear thing just didn't come across as well as it might have.

I'm really torn on this one.  For the most part, I liked the people in the Kings family, I was taken with the  idea of this small, closely-knit island community facing some tough issues and changes coming  from the outside.   I didn't even mind the more fantastical elements built in to the novel's beginning,  although one later instance in particular came across as a little too far-fetched to be taken in stride as just another moment of magical realism. It's just that the unevenness of the writing got to me after a while and left me kind of shaking and scratching my head.  I'd tentatively recommend it based on the positive aspects mentioned above, and I will say that even though this book may not be a favorite of mine for this year, I'm still going to pull out my other novel by this author and give it a try.
Posted by NancyO at 3:56 PM