The Lighthouse, by Alison Moore 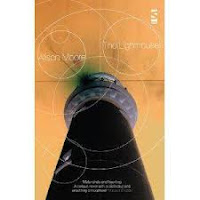 “And Futh, looking at the lighthouse, wondered how this could happen -- how there could be this constant warning of danger, the taking of all these precautions, and yet there was all this wreckage.”


Now here’s a book I really, really like, maybe the best on the longlist that I’ve read so far. I’m not even going to wait until the end of my discussion on this novel to say that I HIGHLY recommend it -- it is so quiet and understated yet delivers a huge wallop that I hope lands it a place on the shortlist. Of course, tomorrow will bring the news of which books go through and which don’t, but if you’replanning to read only the shortlist and this one doesn’t make it, I’d advise getting a copy anyway.  It is that good.

A ferry crossing the North Sea is the setting for the opening scene of this novel.  Futh (no first name ever given) is on his way to Germany for a summer holiday, preferring to stand outside on deck  in the rough weather.  Back in England, he works for a company that manufactures synthetic smells; he and his wife Angela have also recently separated.  After his vacation he will have only an empty apartment to return to, filled with a few boxes of his things and some furniture, but not much else.

In a small hotel in Hellhaus (which translates as “bright house,” or “light house”), near Koblenz, the proprietor’s wife Ester is having her first drink of the day, the one she likes just after finishing cleaning the downstairs rooms.  The hotel is empty, except for one customer there for  breakfast; she leads him upstairs to one of the uncleaned rooms.  Afterwards, she goes back to the cleaning cart in the hall as her husband Bernard comes looking for her to return the gloves she’d left at the bar -- he watches her for a while before he goes back downstairs.  She’s expecting a honeymooning couple and Futh that day; when he arrives, later than expected, he heads for his room and a shower while Ester brings his dinner upstairs.  In combing through his suitcase she finds little to get excited over until she comes to a silver lighthouse,

“about ten centimetres tall and three or four in diameter,” with a “four-sided tower and a lantern room with tiny storm panes and a domed top. In relief on one side it says “DRALLE,” the name of an old Hamburg perfumery.”

As the noise of the shower ends, Ester tosses the lighthouse back onto Futh’s clothes and starts to leave, changing her mind midstream, turning back toward it.  Futh, however, is moving toward the bathroom door, and she leaves.  She is noticed by the ever-present Bernard, and later,

“In the night, there will be a storm. it will be brief, if a little violent, and hardly anyone will even realise it has occurred, although they might hear it raging, thundering in their dreams.”

In the morning, hoping for breakfast, Futh runs into Bernard, who tells him he should leave.  Thus begins Futh’s first full day of his walking vacation, a time filled with thoughts about Angela -- how they met, got together, married and failed; as well as his life growing up alone with his father.  But time and again his thoughts give way to the mother who abandoned him when he was a very young boy, after the family had returned from a vacation in Cornwall.  The lighthouse perfume case Futh carries in his pocket was his mother’s, originally filled with lilac scent.

The Lighthouse has a very symmetrical structure and there is also a matching and beautiful balance of symbolism  moving back and forth between the stories of  Ester and Futh up through his last vacation day, when his trip will circle him back to Hellhaus before he is to reboard the ferry to take him home.  Scents abound in olefactory reminders of the past;  the lighthouse is a constant factor throughout the story, sadly not so much of a  symbol of safety but of wreckage.   The book is filled with haunting notes of loneliness, darkness and isolation; it’s not a happy story at all.   Futh is a tragic figure -- naive, childish, awkward -- almost as if his life stopped the day his mother left.

I can’t begin to say what an incredible book this is; I loved it so much I bought extra copies to share with friends and I’m adding it to the book group’s reading list this year.  I got so lost in this book that any interruption was unwelcome; I read it in one sitting and sat thinking about it for hours afterwards.  From the casual reader perspective, in contrast to some novels I’ve recently read, The Lighthouse is understated but powerful, making the point that an author doesn’t need to engage in being oh so clever to write a wonderful book.  The symbolism abounds in this novel but not in a boggy way so as to frustrate the reader.  The only negative thing I have to say about this novel is that its ending comes so quickly; at the same time it is not at all unexpected.

If you aren’t into haunting or tragic then this probably isn’t the book for you, but I LOVED this novel -- I hope it does well in terms of sales even if it doesn’t make to this year’s Booker Prize shortlist.

Email ThisBlogThis!Share to TwitterShare to FacebookShare to Pinterest
Labels: book reviews - fiction from the UK, favorite