*Now You're One of Us, by Asa Nonami

The quotation above, taken straight out of this novel,  may be the understatement of the year.  While the concept of what's weird may be in the eye of the beholder, there's no mistaking that Now You're One of Us definitely belongs in this category. I finished it two days ago and couldn't even pick it up again to write this review.  Ick. Although it's not as strange as say, books by Carlton Mellick III (who, for me, heads up the category of weird), it's pretty out there.  The book is listed as mystery/horror on the back cover,  and  while it's definitely horrifying, it's more of a suspense novel where the author keeps you reading by edging ever closer to what's really going on but never quite getting there until the last moments. And while I liked feeling the tension ratchet as I was constantly scratching my head wondering just what the hell the big reveal is going to be, once I got there, it was a shocker.

A young woman named Noriko marries into the wealthy Shito family, which consists of four generations living under the same mansion roof.  She can't believe her luck -- they're all so incredibly nice, heaping praise on her for the slightest thing, always calling her their "treasure," and making her life easy in her new home. As a new daughter-in-law, the situation is better than she could have imagined, although she still feels like she's an outsider in many ways and tries desperately to fit in.   But while hanging up the family's laundry one day, a man approaches her, saying there's something he has to tell her.  Noriko wonders what he could possibly have to say, but before he gets the chance, a family member comes out and he clams up then walks away.  The man turns out to be one of the family's tenants in one of their many properties, a former ice vendor who has fallen on harder times.  While Noriko is away on a visit to her family, she learns that the man's home has burned down and the man is dead,  and she begins to wonder if perhaps something not kosher is going on here.  Add to that some strange conversations overheard deep in the night, seeing things she couldn't possibly be seeing, and other odd things, and Noriko's suspicions continue to mount.  After confiding her fears to her school friend Tomomi, things in the Shito household move swiftly into bizarro world, but  Noriko's worries are always countered by the family's constant reassurance, to the point where Noriko begins to wonders why she's so mistrusting and hurtful toward this family who is so good to her, a family as she notes,  she can "trust from my heart."

I have to admit to being sucked into this book pretty much all the way up until the end. The author's talent lies in ratcheting up the tension and suspense level all the way through the novel, and the reader is compelled to keep turning pages not only to see what's going to happen next, but also because he/she wants some kind of satisfying explanation for all of the bizarre things going on here.  Noriko's oscillation between the real and unreal is a good reason to keep reading, as the creeping doubt in her mind transfers over to the reader, making it a highly-suspenseful story.

But there are also reasons this book bothered me. First, there comes a point where you absolutely must wonder why Noriko doesn't just go leave everything and run home to the protection of her own family,  a question I kept asking myself many times over throughout the story. Any one with half a brain would have gone away and never looked back. Then there's the ending -- I won't say what it is, but my first reaction was literally that of "wtf??" and then a desire to run and take a shower. So maybe in some bizarre context it makes sense, but it's still unsettling even thinking about it now,  two days after I finished it.

If you're really into the realm beyond strange, this one will make you really happy.  The best part of the book is in the getting there, but once you've arrived, don't say I didn't warn you. 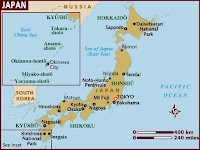