Me and HP -- a pictorial view of my addiction

I've just finished Black Wings of Cthulhu, edited by S.T. Joshi, biographer and bibliographer of among other people, H.P. Lovecraft (HPL).  But before posting a review in a separate post, I wanted to briefly share my fascination with HPL and those who have been influenced by him over the years.

I remember I was in a Borders bookstore once and was totally bored, looking for something to read.  Skimming through the sci-fi/horror shelves, I came across this book, 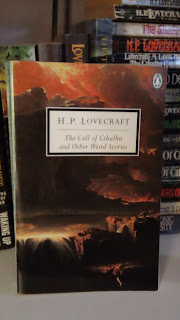 a Penguin edition of HPL's The Call of Cthulhu and Other Weird Stories. Having never heard of HPL before, I thought well, here's something new, so I bought it, took it home and started reading it. That was the beginning of my long career with Lovecraft -- and my collection has grown just a wee bit since.  For example, I went a little nuts with Chaosium titles: 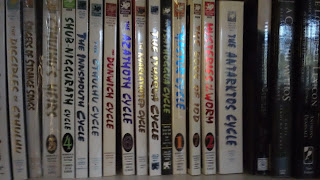 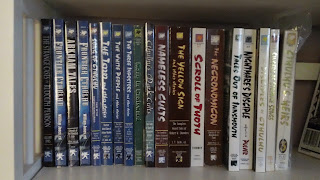 then I had to have the reference books (these are but three):

then I started buying anything and everything to do with HPL, including books by authors who'd been influenced by him (here's a random sample... I have way too many to get into one or two photos): 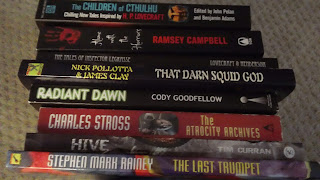 Not being satisfied with only Western authors, I was elated to find Japanese Cthulhu: 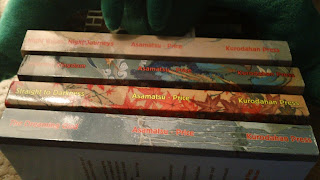 Soon the books from RPGs hit my library, like the Delta Green series (I bought them all when they were still in print and still affordable), and then I started collecting original Arkham House editions (again, way too many to photograph). 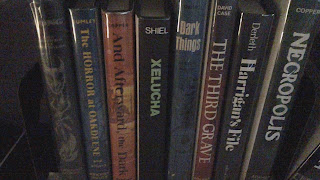 My addiction was getting so very bad that my husband finally gave up and for my birthday one year, bought me a special gift: 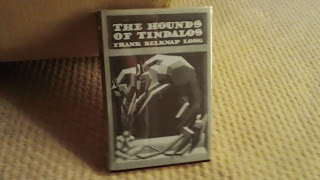 a first-edition Arkham House edition of Frank Belknap Long's Hounds of Tindalos.  Then friends and family got into the act with Cthulhu toys, 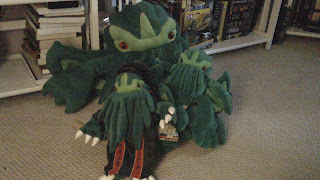 t-shirts, and even a plush Hound of Tindalos: 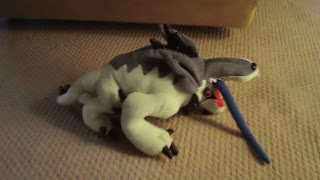 I still have an incredibly strong addiction to eldritch tales,  and it all started with one book.  I'll probably be collecting them until I die -- some people collect souvenir spoons, I collect Lovecraft and those who came after.
Posted by NancyO at 9:55 AM