The Last Storyteller, by Frank Delaney 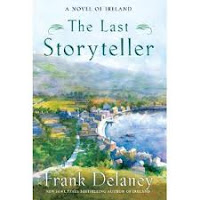 My many thanks to Tara for offering me this book, and to Random House as well.  The Last Storyteller is the final book in Delaney's three-volume series that begins with Venetia Kelly's Traveling Show  then continues with The Matchmaker of Kenmare.  Now in Last Storyteller, Delaney offers his readers a novel of historical fiction that not only continues to highlight Ireland's 20th-century past, but also shows that the stuff of legends has a tendency to  reverberate in real life and human experience.  Most importantly, however, Delaney weaves throughout this book the idea of the transforming  power of storytelling, which for readers is undeniable.  But he adds another dimension -- that of the wandering seanchai, who travels the country sharing his stories.   For readers who are already familiar with the previous two books in the series, Last Storyteller also continues the story of Ben McCarthy, the long-estranged husband of Venetia Kelly.

McCarthy works for  Ireland's Folklore Commission, and he lives on a "staple diet" of "herbal cures, rambling ballads, family curses, jigs and reels played on fiddles and pipes, nonsense verse, riddles and recitations -- and above all stories."   Ben's travels have given him the opportunity to meet many different kinds of people, but he is most at peace with his friend John Jacob Farrell O'Neill, seanchai, a  "fireside storyteller," a "descendant of the bards who had entertained kings and chieftains long before Christ was born." But because of events from his past, and more recent happenings as well, Ben is still in a deeply-entrenched state of loss and melancholy.   The Last Storyteller is his own story, addressed to his children Ben and Louise, but it is also a tale of how the power of storytelling leads to Ben's own personal transformation.   Taking  a bit of advice given to him from his old friend James Clare, who is dying as the novel opens, Ben discovers that

"One day you have to tell the story of your own life...and perceive it as myth. when you can do that -- that's when you've finally grown up."

The events of Ben's life in this novel begin in the mid 1950s, and the book takes the reader through turbulent times in Ireland's history that have a bearing on Ireland's modern situation.

The storytelling aspects drew me in to the novel and kept me there, as did the ongoing story of Ben McCarthy and Venetia Kelly, which I first discovered in Delaney's Venetia Kelly's Traveling Show, probably my favorite of the author's three connected novels.    The image of a storyteller  being welcomed into the  homes of strangers, going  from fireside to fireside, sometimes staying into the wee hours was quite enchanting; the idea of people gladly opening their doors to this person also grabbed my attention, as did the stories Delaney incorporated into the book.  At the same time, the parallels in the stories were a bit too coincidental to Ben's adventures, and it bothered me a little that not enough distance was put between O'Neill's telling and the events unfolding around Ben and those near to him.  And sometimes the dialogue was a little too much; there were entire scenes that sometimes dragged due to wordiness, leading to the dreaded skim.

However, it is quite obvious that the author succeeded in getting his message across and aside from some of the more lengthy conversations and coincidences, I liked this book.  The Last Storyteller and the books that precede it it are much lighter in tone than my regular reading choices, but I have a fondness for Delaney's novels, a) because they're set in Ireland, and b) because  the author has a gift for storytelling.  The novels are not complicated, they are very approachable in terms of reading, and make for a good and relaxing reading experience -- exactly what I need at the moment.   My advice: although you could easily catch up with what happened in the previous two novels, start with Venetia Kelly's Traveling Show and work your way toward this one.  I think you'll get much more out of The Last Storyteller with the backstory provided by the other two books, and this book will be more meaningful in the long run.   And if anyone knows a seanchai who wants to come sit by my fireside, send him on over.

NOTE: Since I'm finished with this book (an ARC ), if anyone would like it, it's yours for the asking.
Posted by NancyO at 11:52 AM