After the Fire, a Still Small Voice, by Evie Wyld 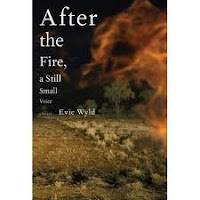 "Sometimes, people aren't all right and that's just how it is."

After the Fire, a Still Small Voice is Evie Wyld's first novel.  It won the John Llewellyn Rhys Prize in 2009, and a year later it was on the shortlist for the Orange Award for new writers.  In 2010 it also won a Betty Trask award, and was on the International IMPAC Dublin Literary Award's shortlist for the 2011 award.  Considering it's the writer's first novel, the recognition seems to have been major. After having read this book, I can see why.

The novel deals with the repercussions of war both on a man's soul and on the lives of those closest to him.   There have been a number of books that have dealt with this topic, but in Wyld's novel, she brings in something new as she follows not just one man's return from the war but three generations of men in the same family who have suffered either directly or indirectly from two different wars.   The story is compelling enough on its own, but what lifts it out of the range of just good fiction is the author's evocation of place, one of the strongest I've seen in a novel in a very long time.

Frank Collard has left Canberra, swapping  city life for the isolation of  his grandparents' old rustic shack along the coast where he used to go as a kid. He is estranged from his father, Leon, who also lost his father,  ultimately due to his experiences in a Korean prison camp during the Korean War.  Leon's father had escaped from the persecution of the Jews during World War II and had come to Australia; during the Korean conflict he had enlisted, leaving Leon home with his mother. Upon his return from the war, he had changed; he was no longer able to be around other people and ultimately left his family, taking off for points unknown.   Leon's mother left her son to go and find her husband, leaving Leon behind to run the family bakery shop, sending him the occasional postcard once in a while to let him know they're both okay.  Neither have returned by the time Leon is drafted into service in the Vietnam War, where his experiences leave him a changed man as well,  and neither are around when Leon returns.  They've bought the shack that after their deaths Leon will inherit, the one where Frank is living at the beginning of the story.  Not long after Leon comes back, he also looks to escape, wandering off into the outback.   Frank is now at the old shack, trying to escape his own anger-fueled demons.  The story weaves together these three strands, going back and forth through time to create an incredible story of men seeking stillness in their lives after the traumas each has suffered.  The stories of these three men echo and resonate down through the generations, as does the idea of escape.    The book is also populated by other characters  who have  had their own share of trauma and who deal with them in various ways.

From the Australia beaches to its vast outback, to the jungles of Vietnam,  the sense of place brings this book alive, as does Wyld's insightful descriptions.  For example,   Frank's first night's sleep in the shack was interrupted by

"the feeling that there had been some noise of movement in the shack, like a soundless bird had flown in one window and out the other ruffling the air as it went. He listened for feathers landing on the floor. Past the frogs and insects, the drill of night things, he heard it again. The night sounds dipped and let the noise through -- a faraway cry, something prehistoric, like the noise of a pterodactyl in an old plasticine movie. His ears became full of the sound of his own blood and he ticked in his head all the explanations. 'Bird' was what he arrived at. Some kind of bird was what the Creeping Jesus was. Owl. Jabiru. Cockatoo. He listened past his own breathing, past his own blood, then past the outside noise, banana leaves on corrugated iron, past the scrubbing of the gum trees in the little wind, .... Again like wind dropping, the nightbirds tucked their heads under their wings and the sound echoed from far away in the bush, a siren, a vowel noise that was long and thin, and when it reached its peak it broke and turned into a low howl, tailing off like a sad question."

The noise that "echoed over the tops of the cane," that sometimes "had the lightest touch of a man or woman about it," keeps Frank awake with his memories,  as the nights "drip slowly by."

After the Fire, A Still Small Voice is not only a good novel, but a very timely and pertinent one as well, considering what's going on in the world and the problems of many returning soldiers and servicemen.  While sometimes I felt the narrative could have been a bit less rambling in spots,  I really liked it and each time I put it down I couldn't wait to get back to it.  I could sense the loneliness within each of the main characters, although I was much more intrigued by Leon's story more than anyone else's. I can't explain why exactly, but he is a character I won't soon forget. Definitely recommended.
Posted by NancyO at 1:10 PM