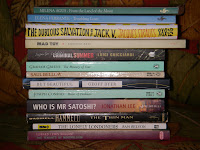 After the last two months, weighty tomes are not where I'm headed right now.  I'm thinking less word volume is probably a good break, although I do have some longer ones I plan to add to the mix.  The books in the picture may or may not end up on this month's list; I just grabbed a few thinner ones to use as a visual.

And now, a short personal interlude: we just got back from a lovely 4-day mini-vacation to Trinidad, which is only a short, 4-hour flight away but at the same time, a whole different world.  I wanted to post a couple of pictures of the place -- we had such an incredibly good time.  We  stayed completely off the tourist track and were taken around the island by our native Trini friends, who took us where they hang out.  For example, here's a very sweaty me (it was HOT) trying to learn how to dance Trini style with a group of total strangers who, along with me, Larry, our friends and about 200 other people, went out, grabbed some Stag beer and stood outside on a street corner listening to a DJ playing local music for about 2 hours: 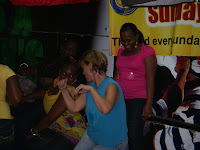 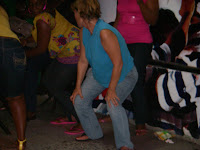 and then there's the scenery: 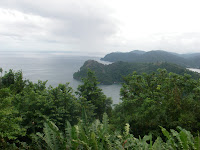 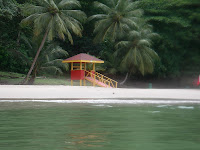 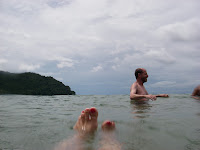 and the Caribbean itself (I'm the feet)
-- back to bookland --
I have several reviews to post from September still, and will be working on them this week.  Hopefully it won't take long to catch up, but my mind is still on the island, so it will be a day or two!  Coming back to reality after paradise is tough!!!
Posted by NancyO at 9:01 AM