*On the Yard, by Malcolm Braly. 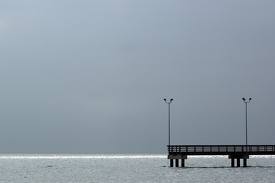 Tranquility in balance again, time to get back to work.  Every so often I just have to take a break from everything, slow down, take time for myself and then come back.  That old saying about "when it rains it pours" pretty much sums everything up over the last few weeks.  But things are easing up, I feel better and am ready to turn the computer back on, just in time to end the month with four books from NYRB classics. There were others I finished this month, but they can wait a couple of days.

To be quite honest, I'd never heard of this book before I went looking for NYRB titles to read.  Another NYRB title I'd read earlier, Hard Rain Falling, by Don Carpenter, also dealt with life in prison, but it examines the causes of why the main characters went to prison, what happened to them while they were there, and then what happened after they were released.  Unlike that novel, the action in  On the Yard occurs nearly completely within prison walls, and the story is told through the voices of a group of prisoners as well as by people who work there.  As a matter of fact, the author, Malcolm Braly, had written three earlier novels while incarcerated, then started On the Yard while doing a stint at San Quentin. He had to do it in secret since it was based on his own experience and he was threatened with revocation of parole if he continued to write it, forcing him to write in secret and to then delay its publication.

In this book, the characters run the show and drive the narrative  -- the author often floats from character to character, as noted by Jonathan Lethem, who provides the book's introduction:

...moving...through the minds and moments of dozens of characters, some recurrently, some only for a sole brief visitation which nearly always proves definitive. Three or four of these are into the minds of the prison's keepers, including that of the morose, long-enduring Warden. The rest are a broad array of prisoners, some "hardened" repeaters, some newly arrived at San Quentin, some floating in between and trying to measure the rightness and permanence of their placement inside those walls.

Lethem's assessment is quite accurate.  How these people deal with the stultifying sameness that is their life day after day is one of the main themes of this novel.  For example, there's Billy Oberholster (aka Chilly Willy), imprisoned for several armed robberies, who made his way to the top of the food chain so to speak on the inside by being at the head of several operations: he runs a usurious cigarette loan business, has the corner on nasal inhalants (which the prisoners use to get high on amphetamine sulphate), and runs a tidy black-market business that offers him a great many advantages while serving out his time. His influence is spread everywhere, down to his ability to maintain a cell with no roomies.  He is the king of the yard - and uses others for his dirty work, keeping his hands clean. He counts among his friends Society Red and Nunn, a repeater back only after half a year of freedom.  Then there's Stick, a sort of Neo-Nazi who survives through creating scenarios in his head with himself as the centerpiece -- constantly staging "new myths" in which he plays the major part, imagining himself as  vampire and deliverer.   Another most interesting character is Lorin -- an intelligent 22 year-old, in for stealing a car, spending his time trying to fend off the attention of another inmate who has a thing about shoes.  When he's not dreaming about Kim Novak, Lorin works on his poetry writing. One of the most interesting characters is Paul Juleson, who's been incarcerated for the murder of his wife, and who wants nothing more than to be left on his own, often living in favorite fantasies, trying to steer cleer of the other inmates,  "watching the animals from a distance and taking every precaution necessary to keep free of them in all essential ways."  He spends his days mostly reading and visiting the library on his lunch break; the only person on the outside who still keeps in contact with him is his aunt, who sends him $5.00 each year on his birthday.  When Juleson decides to spend his not-yet-received birthday cash on cigarettes, he runs afoul of Chilly Willy when the money fails to arrive, leading to one of the major plots that runs throughout the novel.  Each character's worst points are carefully revealed rather than soft soaped, yet the author provides them with a fair amount of points with which the reader finds him or herself showing some empathy -- including those outside cell bars: the psychologists, guards and even the warden and his servant. For readers who are more interested in plot, there are several stories at work that will keep you actively engrossed in the story. But it is Braly's characters, each brought to life (if even only for a few lines in some cases) that will draw the reader's attention on a deeper level.

While its content may seem tame to modern readers, considering what goes on in today's prisons, On the Yard is still a solid read.  Kurt Vonnegut's blurb on the back cover notes that this book is "Surely the great American prison novel." In my case, it would be difficult to agree with his statement since I don't have a lot of reading experience in that area, but I did find On the Yard to be quite engrossing once the cast of characters was introduced. It seemed a bit slow at first (as character-driven novels often can be), but as I started the getting the picture of what happens within the prison walls (how the hierarchies play out, the interplay between prison officials and the prisoners, and among the prisoners themselves), I couldn't put this book down.  The author, Malcolm Braly, spent a large part of his life behind bars in different prisons, so he knows what he's talking about and this is exemplified in the book's realistic and gritty tone.  Obviously, the subject matter might not be for everyone, but it is one of those novels that you won't soon forget after putting down, not just because of the story, but because of the writing and Braly's mastery of characterization.
Posted by NancyO at 11:34 AM