The Memory Police, by Yoko Ogawa 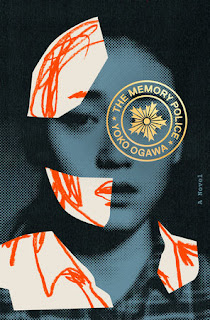 It wasn't too long after starting this book before I noticed something strange about it.  By page 98, it hit me that for a story  labeled as "Orwellian,"  it was written in a surprisingly quiet tone.  Without discounting the bizarre events recounted in this book, the understated style alone was actually disturbing in its own right, and I experienced a sort of weird off-kilteredness throughout the story.

As the novel opens, the narrator finds herself wondering


"what was disappeared first -- among all the things that have vanished from the island."

A curious beginning, and by the time you reach the ending, it becomes all that much more curious given the fact that the novel is written in the first person.  (Cryptic I know, but cryptic in terms of this novel seems par for the course.)    I said somewhere that the book has a surreal feel to it, and I don't use the term lightly here.

Our narrator also recalls a conversation she had with her mother as a child, in which she was told that

Continuing, her mother tells her that losing a memory "doesn't hurt," that

As just one example of things that were "disappeared from the island" among many,  her mother explains to her about perfume:


"In those days, everyone could smell perfume. Everyone knew how wonderful it was. But no more. It's not sold anywhere, and no one wants it. It was disappeared the autumn of the year that your father and I were married. We gathered on the banks of the river with our perfume. Then we opened the bottles and poured out their contents, watching the perfume dissolve in the water like some worthless liquid. Some girls held the bottles up to their noses one last time -- but the ability to smell the perfume had already faded, along with all memory of what it had meant.  The river reeked for two or three days afterward, and some fish died. But no one seemed to notice. You see, the very idea of 'perfume' had been disappeared from their heads."

At some point things get "back to normal, as though nothing has happened, and no one can even recall what it is that disappeared."

One never knows what will disappear next -- various types of food, birds, hats, roses, photos, etc., --  but not all people lose the memories of what was, however, and to ensure that their dictates are followed, the Memory Police try to round up these people and take them away to some unknown location, the fate of the narrator's mother.   They are "men who are determined to see things disappear,"  and


"from their point of view, anything that fails to vanish when they say it should is inconceivable.  So they force it to disappear with their own hands."

The narrator is a novelist, despite the fact that on the island, few people seem to have need for novels; interspersed throughout her story are pieces of the unsettling but telling story she is currently writing.  She works closely with her editor known only as R, and as the blurb notes, she discovers that because he is one of the people whose memories haven't disappeared, he is at risk of being taken away by the Memory Police.  She hits on a plan to hide him, and builds a secret space in her home where he can live in relative safety.  In the meantime, things on the island continue to disappear ...

As author Silvia Moreno-Garcia says in her NPR review of this novel,


"If you view The Memory Police as one big, fat metaphor for state control -- and I'm sure many people will see it as that -- you'll probably find more pleasure in it than if you attempt to consider it in other terms."

While the Orwellian tag is beyond appropriate (I was downright haunted by the thought of what the Memory Police might cause to disappear next, and also by the matter of  complicity) there is most certainly much more going on here in terms of  isolation, memory, loss, and the self.  In this world, to forget is to survive,  but at what cost?


While I was at first curious about the island's backstory, hoping it would be explained, eventually  it just became easier to  accept that things are the way they are here, making the reading of this book much more of an experience in the long run.   I finished it well over a week ago one morning about 2 a.m., laid there thinking about it for another two hours, and it hasn't left my head yet.   It is one of the strangest books I've read, but honestly, for me, that's part of the appeal.

Recommended with the caveat that this is a novel that will likely leave readers with more questions than answers;  there is no explanation as to the why of things, described here as "the laws of the island;"  they just are.  It also has an ending that  might just leave people scratching their heads with a big WHAT? standing out in their minds, as so many readers have noted.   While it may not be everyone's cup of tea, I loved this book; then again, I'm very much drawn to novels that I've labeled "strange with purpose," so I'm not surprised.