a real-world book group read: Em and the Big Hoom, by Jerry Pinto 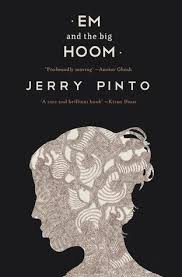 "What is a cure when you're dealing with the human mind? What is normal?"

I picked up my phone on Friday morning and my friend and fellow book-group member says to me, "you really put your balls out there with this book," and I suddenly had a panic moment since I hadn't even started it and we meet on Tuesday.  Yikes. After explaining to her that I hadn't even opened it and after some more chatty conversation about the novel,  I figured I'd best be hustling my bustle and get reading. After all, it was my choice for December's group read so I should know something about it, right?    Note the 2012 copyright date -- this book's been sitting on my shelves since it was longlisted for the 2013 DSC Prize for South Asian Literature, which is why I bought it in the first place. It didn't win, but it did win the 2012 Hindu Literary Prize.   Oh my god -- 2013 was such a good year for reading, with some excellent novels like Jamil Ahmad's The Wandering Falcon (a lovely book that no one should miss), River of Smoke by Amitav Ghosh, book two of his incredible Ibis trilogy (my favorite historical fiction series ever), and Jeet Thayer's Narcopolis (that year's winner)  to mention only a few.  [As a side note, 2014's winner, Chronicle of a Corpse Bearer, by Cyrus Mistry, is another no-miss novel that I can highly recommend. Memo to self - put that one on next year's group read list.]  Anyway, I started Em and the Big Hoom after that phone call, took a break around 6:30 to go out for Thai and then finished it Saturday morning.

The first thing I'll say is that it was difficult to keep myself grounded in the idea that this was fiction since it reads so much like a memoir.  One reviewer's overall opinion: "often wonderful writing, but feels too anchored in the auto/biographical" which I assume is a negative here, but I thought otherwise. To create a fiction that reads like reality is to me a mark of a good author; if it is based in reality, well, to put forth one's very soul  cloaked in fiction is a gutsy, bold move, but to each his/her own, of course.  The Em of the title is the narrator's mother, Imelda, who is married to Augustine, aka the Big Hoom.  The story is told via the son, the younger of two children born into this family (the other is daughter Susan), who as he says, wants to "try and understand her," to

Our first clue that something is not quite right is that the novel opens in "Ward 33 (Psychiatric) Sir J.J. Hospital."  The serious bipolar depression that keeps landing her there after several suicide attempts is the "this" that the son is trying to understand, but the novel is so much more than a young man trying to understand his mother's mental illness, which is difficult in and of itself.  At one point Em notes that "Nobody knows what I am going through," and her son agrees:


"Madness is enough. It is complete, sufficient unto itself. You can only stand outside it, as a woman might stand outside a prison in which her lover is locked up. From time to time, a well-loved face will peer out and love floods back. A scrap of cloth flutters and it becomes a sign and a code and a message and all that you want it to be. Then it vanishes and you are outside the dark tower again. At times, when I was young, I wanted to be inside the tower so I could understand what it was like. But I knew, even then, that I did not want to be a permanent resident of the tower. I wanted to visit and even visiting meant nothing because you could always leave. You're a tourist; she's a resident."

But his real aim is to get underneath her condition, to recover the woman herself, doing so via her stories, her many writings, and what she says when she's speaking in a free-association sort of way, although this isn't always easy, as he notes, since


"Conversations with Em could be like wandering in a town you had never seen before, where every path you took might change course midway and take you with it. You had to keep finding your way back to the main street in order to get anywhere."

One way to approach this novel is as a sort of testimony to Em, but at the same time, it's the Big Hoom who also gets much credit, for being the glue that holds the family together as they undergo crisis after crisis. And then, of course, the son, who just dreads that he may be watching his own future play out in what's happening to Em.  The thing about this book is that there is so much at work here that my short little post can't possibly do it the justice it deserves; there are so many layers to uncover and so many relevant topics that crop up throughout the story that it is again one of those books that a person needs to discover on his/her own.

It's a lovely novel, poignant, sad, filled with despair, but sometimes funny in a darkly humorous sort of way, and frankly, sometimes it's just flat-out, absolutely frightening.  And now that I've written that sentence, it seems to me that my reaction to this book must mirror a range of emotions that caretakers or family members of those suffering the same "madness" as Em does here must also experience, so to me the "auto/biographical" feel becomes even more real.  It's a good writer, I say, who can bring those feelings out onto the page where they then transfer into my head and live there for the duration.

I can't recommend this book highly enough. I'm just sad that it's taken me three years to get to it. 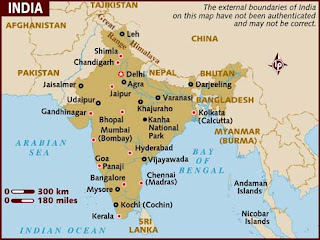 other reviews worth noting:

The Guardian
The Complete Review
The Toronto Star

I would skip the Kirkus review, because once again, it's written by someone who did not thoroughly read the novel, as is made obvious in the statement that says "the father, unaccountably, is the Big Hoom."  Well, Kirkus reviewer person, had you actually paid attention, on page 7 the author spells it out for you how that nickname may have come about.
Posted by NancyO at 11:17 AM