* The Quaker City or, The Monks of Monk Hall: A Romance of Philadelphia Life, Mystery and Crime by George Lippard


"I Vonders how that’ll work"

I've been nibbling away at this novel for a while now and finished it just late last night. The Quaker City follows on the reading heels of Thompson's Venus in Boston of my reading lineup because I wanted to read another example of "city mysteries" that were so popular in their day.  Lippard's novel (according to David S. Reynolds in his Beneath the American Renaissance: The Subversive Imagination in the age of Emerson and Melville) sold

Reynolds also calls it the "quintessential American Subversive text," and I'd add that it's probably the funniest work of early American fiction I've read so far this year.  It's also a twisted, sordid novel filled with debauchery, corruption,  sensationalism and some of the most vile characters you'd never want to meet. It is rather a mishmash of genres, and ranks high in the melodrama department.  Lippard got a chance to have his novel presented on the stage, but his hopes were quashed when, as Jamie Bridges notes in the Victorians Institute Journal Annex, the advertising started raising complaints:


"members of the public, some of whom were featured in the play, began to protest against its performance. It was one thing to read an exposé in the privacy of one’s home and something altogether different to have the characters brought to live (sic) in a public forum such as the Chestnut Street Theatre."

Evidently art too closely imitated life here -- parts of the story were based on a real-life case of 1843 in which a man seduced a sixteen year-old girl,"under false pretenses and allegedly lured her into a brothel and raped her." The girl's brother then killed him, went to court, and was acquitted due to reasons of insanity.  When the advertisements for the play based on The Quaker City went out, the brother (Singleton Mercer)  tried to buy two hundred tickets and threatened a riot if the show went on. According to Reynolds in the introduction to this novel, "threats were heard that the theater would be sacked or burned." (xiii).   The protest went as far as the mayor, who refused to let the play happen.

But enough of all that. Monk's Hall is a


"queer old house down town, kept by a reputable old lady, and supported by the purses of goodly citizens, whose names you never hear without the addition of 'respectable,' 'celebrated' or--ha--ha--'pious'..."

These are not the "outcasts of society," but rather "Here were lawyers from the court, doctors from the school and judges from the bench," one of the "vilest rookeries in the world."  It is run by a deformed pimp  who goes by the moniker of Devil-Bug, and to get into this hidden/secret establishment, you either have to come with a friend or know the secret password, which changes every day. It's sort of reminiscent of the old Hellfire clubs, but here there are trap doors in the floors, bodies in the cellar, and all sorts of devilment going on in the rooms upstairs.  The titular "monks" are made up of the above-mentioned pillars of society and while some are busy satisfying their physical lusts, gambling, or taking opium,  others spend their time drinking, "flinging their glasses on high, while the room echoed with their oaths and drunken shouts." 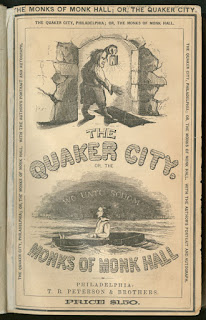 I'm not going to go into plot -- there are three major ones, a number of smaller ones and some subplots stemming from the three big ones so it would be nearly impossible in the amount of space & time that I have.  Suffice it to say that the book takes on several segments of Philadelphia society to expose the city's hidden hypocrisies, and Lippard really outdoes himself in lambasting Philadelphia's religious leaders as well as its media institutions,  financial institutions and wealthy merchants.

I said earlier that the book is also funny in parts -- and despite the sort of sleazy, gothic and often bewildering melodrama that's going on here, there are moments where I found myself actually giggling.  Just as one example, there is a wonderful little set piece that takes place in the lecture room of the True Believers and True Repenters, where the corpulent Parson F.A.T. Pyne (who to me has the distinction of being the most hypocritical person in this novel and who will later become the ultimate sleaziest, most disgusting and grossest  character therein) stands in his pulpit.  The subject is the True Believers' anti-Papist stance and old Syllaybub Scissors is recounting a story about the 10 crew members and twenty passengers of an American ship who'd decided to go and visit the pope after a visit to Naples.  All of them had tracts from the Patent-Gospellers association in their pockets. At their papal visit, they were "called upon to kiss the Pope's toe," refused, and were never heard of again, that is until some time later, an American stopped at the Bologna sausage factory that just happens to be next door to the Vatican.  There, upon ordering a large amount of sausage to be sent back home, he had one cut open and discovered "fragments" of Patent-Gospeller tracts within.  Then later, as a committee of Missionaries is selected to "go abroad to the Pope of Rome," to "allow the Pagan no peace," they are asked as a group

It's one of those things where you probably had to have been there, but it is actually laughworthy in its context, as are a number of different little episodes in this novel.  At the same time, there are scenes that are particularly loathsome, and none so more than Pyne's lusting after a woman raised as a child by Pyne and his wife.  Egad. Even there, once he's drugged her and is waiting for time to elapse while the drug has its effect, he's planning his next sermon.

The Quaker City is difficult to get into at first, but once I was past the first couple of chapters and caught on to how to read this book, it's actually quite fun. It's a dark novel filled with gothic elements including the secret mansion where members dress up in monk's cowls, take on different names,  and convene for debauchery. It is filled with secret rooms, trap doors, secret burial vaults, fallen women and those brought there to face ruination.   My guess is that this is another one that doesn't make it onto a majority of course syllabi for studying American writers, and that's a shame. For one thing, it is interesting that it was such a bestseller, offering a glimpse into what people were reading at the time; for another, it's Lippard's examination of a corrupt society and what makes it thus.  A lot of the issues he uncovers -- the buying of justice in the courts, the double standard between men and women, the hypocrisy of religion and religious leaders, and the corrupt power of financial institutions to name just a few, are still with us today. Funny how some things don't change over time, while others make leaps and bounds -- i.e., the roles and status of women, to be specific here.

I certainly wouldn't recommend this novel to everyone -- I read a LOT of weird stuff and this is among the strangest -- but for those who are at all interested in rather off the beaten path antebellum fiction, it just might provide a few hours of entertainment.  It will also provide an eye-opening look at what lies under the surface of the pillars of Philadelphia pre-Civil War society as seen through the eyes of this author, "an espouser of radical causes"  who "waged holy war against all kinds of social oppressors."  I will say, if you're in it solely for the sleaze value you'd be better off with Thompson's "City Crimes" in my edition of his Venus in Boston. Otherwise, it's another very welcome addition to my growing library of early American fiction.