the book group read (January) ... Where the Crawdads Sing, by Delia Owens 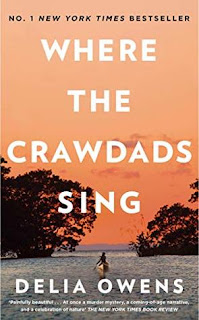 9780735219090
Putnam, 2018
368 pp
hardcover
This will be a relatively short post.  It happens sometimes that a book and I do not get along well, and this is one of those.   I didn't know that would happen when I selected it for my in-real-life book group -- it is highly rated and garners glowing praise among readers and critics alike so I thought we should give it a go.  While it is a book that prompted much discussion, I couldn't help it ... I just didn't like it.
There were two things that I was most keen on when I made my decision for the group to read this book. One, the first paragraph of the  dustjacket blurb reveals that a murder occurred in 1969, and that the suspect among the locals was the so-called Marsh Girl, Kya Clark, so I thought "okay, it's a murder story, I'm down with that", and  two, the fact that the blurb referred to this book as an "ode to the natural world."   As someone who often spends weekends hiking trails in Florida's Everglades, I could get behind that also.  The nature writing in this book was indeed fine -- I loved being in the marsh as the author described it, being in Kya's boat as she navigated the estuaries, and the way in which this girl could read the landscape from an early age.  There were other things as well, among them the way in which the marsh had  formed this girl so that even into adult life she related to people by comparing them to the behaviors found among wildlife.  It's easy to understand why these sections were so strong, since prior to writing this novel Ms. Owens spent time living in the wild and authored three nonfiction books, one of them winning the John Burroughs Medal for natural history writing in 1984.   The thing is though that as much as I enjoyed her forays into the natural world in this book, for me they weren't enough to save the story that played out here.   It was all too farfetched, too predictable, the characters were too stereotypical, it read like a YA novel, and the writing was just not strong enough to make it even halfway enjoyable.  The murder plot, which as an avid crime reader I was looking forward to, completely fizzled as it  was also predictable -- I knew who did it very early on.    At one point about a quarter of the way in, I was completely bored, and actually embarrassed enough that I sent my friend an email actually apologizing for choosing this book for the group.
As I said in my goodreads post, that's me once again not agreeing with thousands of other people. 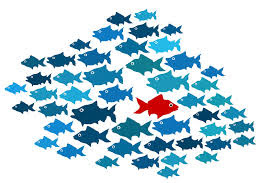 I should know by now that just because a book is a bestseller doesn't necessarily mean it's good.  And quite honestly, me not liking this novel probably doesn't mean a thing to its author, since according to Wikipedia, by 2019 4.5 million copies had been sold.   I will say that going into it I really wanted to like it, but in the long run, it just wasn't my cup of tea.  And that's okay.
Posted by NancyO at 11:03 AM