The Tartar Steppe, by Dino Buzzati 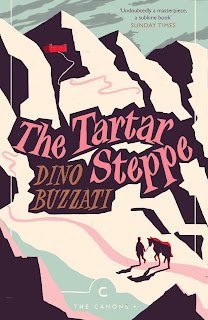 9781786891648
Canongate, 2018
originally published as Il deserto dei Tartari, 1940
translated by Stuart Hood
275 pp
paperback
"...perhaps I might be some use if there was a war. Maybe I wouldn't. Perhaps in a war -- but otherwise no use at all..."
Perhaps ironically, perhaps not, the first page of this novel starts on the day that Lieutenant Giovanni Drogo has "looked forward to for years -- the beginning of his real life."  I didn't fully appreciate the impact of these words until after I'd finished The Tartar Steppe and went back to the beginning before closing the book.
It is on this day that Drogo leaves the city to start his posting at Fort Bastiani, beyond which is desert:

"Stones and parched earth -- they call it the Tartar Steppe."

The soldiers at Fort Bastiani are there, it seems,  to protect against a possible incursion by the Tartars, who may have lived in the desert "Long, long ago..." but have not been seen since.   On reaching the Fort, Drogo realizes that he may have made a mistake, but was convinced to "put up with staying" there for four months.  Late at night, unable to sleep, he starts to question his decision wondering if somehow his superiors wouldn't let him go after the four months were up, unable to keep his thoughts from wandering to the possibility that he may have to

"stay up there for years and years, in this room, in this solitary bed."

He is warned by the brother of the Fort's tailor  to "see that you leave as soon as possible, that you don't catch their madness"  --    a "kind of illness" common among soldiers who believe that "Great things are coming and that "something must happen."   It is imperative, the old man tells him, to

"Watch out...you will let them convince you, you'll end up by staying here too."

Drogo refuses to accept this, believing himself  to be "an outsider, an uncontaminated spectator," who will be leaving them forever in just "four months' time." However, at the end of the four-month period, he's decided to stay, having become used to things and having

"within him dull sluggishness born of habit, military vanity, love for the accustomed walls which were his home."

As time goes by, he slowly becomes more entrenched at the Fort as he and the men there continue to wait for the "enemy to advance across the steppe, for one great and glorious battle." None of the officers ever utter the word war, as "in it lies their hope," and Drogo waits for "something different," something

"truly worthy of him, so that he could say: Now it is over and I have done what I could."

While all at Fort Bastiani continue to wait over the years, Drogo discovers that life in the city has "become completely foreign to him," that it is now "a world of strangers where his place had been easily filled."  His old friends marry and have families, while Drogo's opportunities come and he lets them pass.  Eventually he finds himself  unable to hold back the "mysterious flood" as

"Everything goes by -- men, the seasons, the clouds, and there is no use clinging to the stones, no use fighting it out on some rock in midstream; the tired fingers open, the arms fall back inertly and you are still dragged into the river, the river which seems to flow so slowly yet never stops"

as his years of expectations fade away into years of emptiness, and as his life becomes no more than an existence as barren as the Tartar Steppe.    And it just might be, according to Buzzati, that Drogo may have been deluding himself all along;  he may just be "an ordinary mortal for whom only a mediocre fate is reserved."

The Tartar Steppe speaks to a life of waiting and hoping for something that may never happen, walling oneself off from everything while hoping for that moment of  meaning in one's life.    It's a good thing I don't mind reading bleak, because this book is one of the bleakest.   At the same time though, it is a beautiful and haunting piece of writing and I'm absolutely kicking myself for having let it sit on my shelves forever.  This one I can very highly recommend, but leave the introduction by Tim Parks until the end.
I loved this book. Absolutely.
Posted by NancyO at 2:05 PM