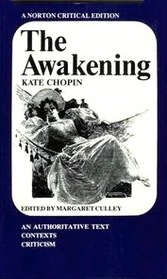 "The bird that would soar above the level plain of tradition and prejudice must have strong wings."

The original,  intended title of this novel was A Solitary Soul, which once you've read the book, actually makes a lot of sense. Both titles work well, though, since main character, Edna Pontellier, is both "awakened" to her passions and to her own mind, and afterwards sets out to try live the life she wants, defying the social conventions of her class, of nature, of her gender, and of her time.  It's a lovely book and the story itself is quite short -- this particular edition has a lot of commentary and critical contemporary reviews which bumps up the page count, but the story itself ran to only 109 pages.  It's to her credit  that the author was able to express so much in such a brief space and come up with a work that is so powerful that it still resonates more than one hundred years later.

The story is very well known, so I won't rehash it here. As far as the book group goes, The Awakening prompted a great discussion as we talked mainly about Edna and about the other women in this story (Adele Ratignolle and Mademoiselle Reisz) and how they may have represented two alternative paths, both rejected by Edna.  The men also became a focal point of discussion, as did the fact that Edna's privileged life allowed her to make the choices she did, since she had servants to do everything including taking care of her children, leading to a discussion about the lack of choices among women in lower classes.  And then, of course, there's the ending, which we talked about for quite a long time.

Reading over several readers' comments on this book, a LOT of people were unhappy with Edna, and I'd be lying if I said I would have given her an award for mother of the year. On one hand, it's  possible to see the book focusing on someone who refused to give up on freeing herself from the strictures that bind her as an individual;   on the other, some people have seen The Awakening as a "cautionary tale" about "the danger of elevating passion over love," or as one person noted, a reminder of the consequences of people "especially women" stepping "outside those unforgiving boundaries."

The only negative (and not for me since I read quite widely in books of this period) is that the prose style can be a bit tedious, but once you've figured it out, the story just pops right out at you and you're hooked.  I can very highly recommend this book -- considering how long ago it was written, it's very much pertinent today.

do not miss this article:

"The Awakening: Learning to Swim," by Barbara Kingsolver