my last novel of 2015, and it's just effing jaw dropping: The Sympathizer, by Viet Thanh Nguyen 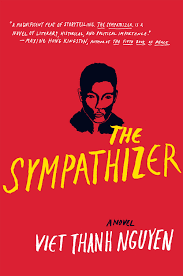 "The majority of Americans regarded us with ambivalence if not outright distaste, we being living reminders of their stinging defeat. We threatened the sanctity and symmetry of a white and black America whose yin and yang racial politics left no room for any other color, particularly that of pathetic little yellow-skinned people pickpocketing the American purse."

Just briefly as to plot (and very much oversimplified):   "I am a spy, a sleeper, a spook, a man of two faces," are the words that open this novel, which for the most part, is a confession to someone known only as "the Commandant." The story is related by a nameless narrator who is a spy for the North Vietnamese communists and has managed to infiltrate the South Vietnamese Army as an aide to "the General" and a member of intelligence under the tutelage of a CIA agent.   The novel begins with the evacuation of South Vietnam and the last flights out, on one of which our narrator finds himself along with his boss, his best friend/blood brother, and a number of other people fleeing as the North Vietnamese Army is crashing the gates of Saigon.  His job, once they reach America, is to watch and to report to a comrade back in Vietnam, which he does in coded letters to his "aunt," his other best friend and blood brother who did not follow him in his escape. Our narrator  keeps a careful eye on the General and his cohorts while the refugees are busily reinventing themselves in order to adjust to life in an unglamorous Hollywood neighborhood.  As the narrator's handler thought would happen, the General has decided to organize several of his former army cohorts in an effort to retake Vietnam from the Communists, and in order to maintain his facade, the narrator must follow along with the general's plan.

The narrator, the titular "sympathizer," is definitely a "man of two faces," and faces a number of contradictions. In fact, this thought-provoking novel is so filled with contradictions that this "two faces" idea runs throughout the book.  In the narrator's case, he is a man of mixed parentage, a fact that has helped to define his identity throughout his life, since in Vietnam, he grew up being reminded that he is a bastard, with a French father and Vietnamese mother. Metaphorically speaking then, he already understands what is implied in belonging in two different places, but the truth is that he is also not in a position to claim either as his own. This idea is repeated again and again throughout the novel, and is one of the main thematic issues explored here, as is the reinvention of the self under less-than-perfect circumstances, capturing  what I would consider the immigrant experience in any country.   This is not our hero's first visit to America; he had first come in the 1960s as an exchange student, when he first started his fondness for things American, but now he finds himself faced with a very different take on the American dream, with different and often-conflicting loyalties, and above all, haunted by ghosts.  It is truly a masterpiece of a novel that also examines not only American perceptions of the Vietnam War, but America's perception of its own role in the war and those of the Vietnamese people as well.

I read a reader response of The Sympathizer that said it should be required reading for every US politician, a sentiment I heartily endorse, especially considering what's going on in the world regarding refugees right now.  But there's so much more here, and as I noted earlier, it's a novel just filled with contradictions, which make for a great satirical look at the promises of the American dream, at America's place on the world stage, etc.; however, it also points out among other things that unlike most historical accounts, the history of the Vietnam war has been the provenance of the losers rather than the victors. It also examines the realities behind revolutions and the effects of the postwar diaspora (aka the "boat people")  from the point of view of the people who were given promises that were never intended to be kept.

A couple of things: first, when I finished it, I sat in my chair absolutely stunned for probably about half an hour.   I noted somewhere that even after it was over my jaw was still pinned to the floor; it took me a day or two to get over that feeling. Second, I want to throttle the dustjacket blurber who says this is a "gripping spy novel" -- people who decide to read this book based on that phrase are bound to be somewhat disappointed since this book goes well beyond the boundaries of a mere spy novel. Third, The Sympathizer is one of the most original books I've read this year, well deserving of any award its author receives.    I have been very frustrated lately and at the point of despairing over  "same old, same old" in recent novels. There are exceptions, of course, including but not necessarily limited to three of my favorite books this year -- A Brief History of Seven Killings, The Buried Giant, and a book published by Pushkin by Peter Froberg Idling called Song For An Approaching Storm about Pol Pot in his pre-genocide days --  but The Sympathizer offers hope that the mental wells of writers haven't yet run dry.

Very highly recommended, one of my few favorite novels of the year. Read it slowly. Take your time with it. Savor it. It's that kind of book.

links to professional reviewers who say things in a way I never could:

from Bookforum, by Lisa Locascio (beware of spoilers)
from The New York Times, by Philip Caputo
from The Washington Post, by Ron Charles