The further I got into Wolf Winter the more I realized that  in many ways this book has the same sort of feel as  Hannah Kent's outstanding Burial Rites.  The most obvious parallel between the two is found in how people managed to live in remote areas and survive in unforgiving conditions. They are also both historical novels, and there is a murder in both as well.  But Wolf Winter is no repeat of Burial Rites -- it is definitely very different.

Set in Swedish Lapland in 1717, the story, which is related through three different points of view,  centers on a  family from the Finnish coast that for personal reasons, trades homesteads with an uncle and settles on the isolated mountain of Blackåsen in Sweden. There are other homesteads on the mountain, but the people in this family -- Paavo Ranta, his wife Maija and their two daughters Frederika and Dorotea -- have their work cut out for them in order to survive, especially in the midst of a "wolf winter,"


"...the kind of winter that will remind us we are mortal...Mortal and alone."

Arriving at Blackåsen near midsummer, fourteen year-old Frederika and her six-year-old sister Dorotea are  tasked right away with taking the family's goats out to graze.  Climbing the hill, Frederika stumbles upon a man's dead body. Her mother Maija knows that the man must "belong somewhere" among the handful of other settlers on the mountain, and eventually comes across someone who knew him. Seeking out the others, she learns that the dead man is Eriksson, and after one look at him, one settler comes to the somewhat cryptic conclusion that "The mountain took him." Maija can tell that he did not die from injuries from either wolves or bears -- she realizes that this was human agency at work.  Word filters down from the mountain to bishop of the parish, who orders the local priest to find out what happened and report back to him; later he will also have to deal with a suicide/murder.  What becomes abundantly clear is that Blackåsen is a place full of secrets -- including the whereabouts of two children and an entire family who had earlier disappeared.  However,  finding the answers to these mysteries will have to take second place behind the matter of survival during this incredibly severe winter, which in this family's case is made worse by the fact that Paavo has gone back to the coast to find work when the need arises, leaving Maija and her daughters to fend for themselves.  As the author notes in an interview that accompanies this edition of the book (a perk from Indiespensable), a 'wolf winter' has another meaning --


"...it's also the expression we use to describe the period in a human being's life that is the worst period, after an illness, or during an illness or upon the loss of somebody you love. Or something that confirms your mortality and makes you feel at the end of the day that we are alone."

Maija has no choice -- she must survive and she must ensure the survival of her daughters as well. As she will discover, despite what ever else is happening around them, and despite her fear, she has no choice but to go on.  As time goes on, she faces an overwhelming number of  difficulties, not all due to the storm. 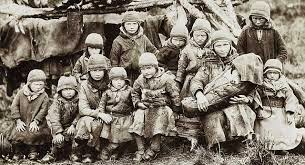 Aside from Maija's struggle to keep her family alive in this bleak and isolated environment, the historical  aspects of this book kept me reading, especially those pertaining to religion. For example, by law,  anyone not already a Christian has been required to become one under an edict of enforced Christianization --  in this case, the Lapp (Sami) people (pictured above), are now forbidden by law to consult with their spirits via their shaman. It is a law that they ignore among themselves; they have long come to their shaman who intercedes on their behalf with the spirits to guarantee safe crossing.  Blackåsen is a sacred and magical space for one such group, and even Frederika is beginning to discover that the mountain is a living thing that is trying to communicate with her.

Wolf Winter immerses the reader into the time period right away.  The sense of place that is evoked through this author's writing is beyond excellent.  The mystery behind Eriksson's death is a good one, as is the mystery behind the metaphorical wall of silence that isolates Maija and leaves her outside of the circle of  fellow homesteaders on Blackåsen. For  me the very best parts of this book were found in the  real-world situations (the mix of the family's survival, politics, religion, the effects on the people of the ongoing war); the magical realism/supernatural elements were also well incorporated to a point before they started to become just plain distracting from the rest of the real-world story.  In my opinion, Wolf Winter without all of the supernatural stuff would have made for a much better novel, but in making the choice to settle the family on Blackåsen, I can understand why so much of it was used here.

For me, Wolf Winter is a liked it, didn't love it kind of novel -- it's something I probably wouldn't have chosen on my own and I probably wouldn't have even considered reading it except for the fact that it was an Indiespensable selection.  It seems like another book designed to catch as many readers as possible, incorporating the 14-year old girl who hears and sees things the others don't, the murder mystery, the supernatural, etc.  ... I even saw it listed as "Nordic Noir" somewhere. Reading past all of that, the book is a good historical fiction novel and I'd recommend it as such.