I don't know the last time I've ever been this unsettled by a novel.  I started it, was intrigued, picked it up again the next day and read until just after 3 a.m. when I finished it. Then I couldn't sleep for another hour and a half, mulling over what I'd just read and trying to calm the anxiety this most excellent book had caused me.  The Night Guest is author Fiona McFarlane's first novel and if this is her first outing, I will probably buy every book this woman writes.

Harry and Ruth Field bought a lovely beachside home up the coast from Sydney after Harry's retirement. Sadly, it isn't too long afterwards that Harry dies, leaving Ruth alone. She's 75, with two sons, one in Hong Kong who is always busy and one in New Zealand. Ruth gets through her day through "symmetry," for example, always beginning her journey up a flight of stairs on her left foot, ending it on her right, or believing that if dinner was ready by the six o'clock news, her sons would be there for Christmas.  As the novel begins, Ruth awakens at four in the morning after hearing noises in the house. She'd heard these noises before, at a German zoo: "loud and wet, with a low, guttural breathing hum punctuated by little cautionary yelps, as if it might roar at any moment ... like a tiger eating some large bloody thing..." A phone call to her son Jeffrey in New Zealand puts her mind at rest and reminds her that the tiger was likely nothing more than a dream, but she realizes that "something important" was happening.  The next day, looking out at the sea, Ruth tells herself that "If one person walks on the beach in the next ten minutes, there's a tiger in my house at night; if there are two, the tiger won't hurt me; if there are three, the tiger will finish me off."

It is then that Frida arrives, sent by the government to be Ruth's carer. A quick conversation with Ruth's son Jeffrey establishes how Frida came to be there:


"A state programme. Her name was on file, and a spot opened up...An hour a day to start with. It's more of an assessment, just to see what's needed, and we'll take things from there."

Jeffrey is delighted at the "good use of taxpayers' money," but Ruth is "not sure about this," thinking she's "not doing badly." But then again, Ruth is somewhat assured because Frida is "Fijian," since Ruth spent part of her childhood in Fiji with her missionary medical parents. And, Ruth tells herself, she's only 75, and her mother had been over 80 "before things really began to unravel."

Things seem to be going well for Ruth with the addition of Frida into her home. Frida extends her hours, and Ruth seems happy when Frida takes on the shopping, bill paying, cleaning, meal preparation and banking. Soon enough the two settle into a comfortable routine. Ruth tells Frida about her life in Fiji, Frida tells her about her brother and her family, and Ruth comes to depend on Frida's help.  Up against Frida's boisterous personality, Ruth's own fragile state starts to become obvious, and the reader senses that for Ruth it is somewhat of a blessing to be in Frida's boisterous company. But a  visit from a friend from Ruth's past starts a long series of waking nightmares that quickly jolt the reader into realizing that all is indeed not well, and events occur  that bring Ruth's dreams of being stalked by a predator into a waking reality. 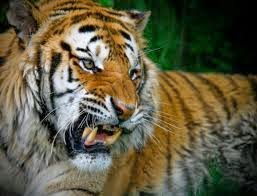 The Night Guest is not an easy book to read on an emotional level.  While I won't give away much, first, a lot of what happens is viewed through the lens of Ruth's mind. It's obvious early on that there's something not quite right with her -- she forgets to wash her hair for weeks, she's let her lovely garden become overgrown to the point where the sand is overtaking it, and chores that used to be done dutifully are also neglected.  As things begin to take a turn for the worse,  it is difficult to pinpoint whether or not Ruth's version of things are anywhere close to lucid and coherent, especially since there is an alternate point of view that gives the reader an impression that maybe Ruth's deteriorating and disoriented mind is imagining things, just as she imagined the tiger in her lounge room.  This constant tug between  versions of reality (and one of the best uses of reader manipulation I've experienced in a long time) is one of the best features of this novel -- the reader is always trying to decide what's really going on here, and in my case, the tension and sheer aura of menace produced by this story continued to grow up until the very end.  Second, this book is incredibly sad and depressing -- there is not one iota of happiness in this book when all is said and done. However, unless the reader's heart is made of stone, the story ultimately should inspire  a deep, beyond--gut-level empathy, and make you want to call one of your aging relatives more often. And even though I'm far far away from Ruth's age,   I also came away feeling like "Oh my god, I hope I NEVER find myself in this position."

The only niggling thing is that explanations at the end come tumbling in a rather rushed manner, but by that time they don't really matter.  As with so many books, in this one, it's more about the journey.  The fact that this writer was able, with only words, to produce so much unease inside of me speaks to how well written I found this book to be. There are relatively few books I've read that move me like this one, that keep me up at night, and that still resonate days after reading them.  I seriously cannot recommend this one highly enough. I loved this book.
Posted by NancyO at 10:51 AM