The Shock of the Fall/Where The Moon Isn't, by Nathan Filer 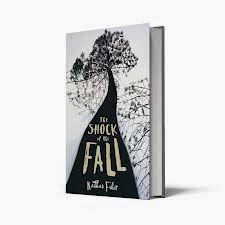 "This is my life. I'm nineteen years old, and the only thing I have any control over in my entire world is the way I choose to tell this story."

So says Matt Homes,  a 19-year-old schizophrenic who is not only struggling with his own illness, but long-held grief and guilt as well.  Writing is his own form of therapy,  and The Shock of the Fall is his story.  I defy anyone not to be even the least bit moved by this novel. It has a genuinely honest feel, and might possibly open up your mind a bit to what it might be like to suffer from a debilitating mental illness, with or without medication.  Just a side note before I launch: The Shock of the Fall has been published in the US as

Matt begins his story ten years earlier with a family vacation, where something goes terribly wrong. Four people -- Matt, his parents, and his brother Simon -- arrive at Ocean Cove Holiday Park, and only three go home. As Matt says of Simon at the outset, "in a couple of pages he'll be dead." The narrative moves through Matt's story before Simon dies, to returning home after his death and the onset of Matt's illness,  to his time   in a psychiatric ward, to living on his own, and finally, to exactly how Simon died ten years ago. Through it all, Matt's grief and guilt travel with him as he tries to come to terms with both, all  while trying to cope with his schizophrenia.

What's so great about this novel is how the author can keep a strain of humor going even while revealing just how much confusion and pain Matt is caught up in as his illness progresses.  For example, on one page, Matt writes


"I've made people feel sorry for me before, mostly psychiatric nurses -- either the newly-qualified ones who haven't learnt to get a grip, or the gooey-eyed maternal ones who take one look at me and see what could have happened to their own. A student nurse told me how my patient notes had nearly made her cry. I told her to go fuck herself. That finished the job off."

while on the next page, Matt relives a time in his friend Jacob's room where he starts talking about smoking a Bucket Bong.

There are also very realistic moments as Matt starts talking about how repetitive life is on the ward, and the "difference between living and existing." He picks Day 13 as an example of his "cut-and-paste life", beginning with


"7 a.m...Get woken by a knock on my bedroom door, and the call for morning medication round. I have a metallic taste in my mouth, a side effect of the sleeping tablets."

and ending with the next day


"7 a.m ...Get woken by a knock on my bedroom door, and the call for morning medication round. I have a metallic taste in my mouth, a side effect of the sleeping tablets.

And then there are the well-imagined characters: Matt's mother and father, both trying hard to carry on after Simon's death and supporting Matt through the onset and progression of illness. There is one scene that I absolutely loved where Matt is escorted to his flat where earlier, his dad had been "quietly painting over the madness" Matt had "covered the walls with."  Matt turns on the light and notices that his father had left him a message, "the first and only time my dad has ever graffitied on a wall."  His dad had written a note that he never realized Matt would see that said

Definitely a tear-jerker moment for me.  The other characters are also well drawn, impeccably described through Matt's eyes: Nanny Noo, the grandmother who also has a brother with schizophrenia, whose heart must be broken, as Matt notes, "to know that I was next"; Jacob, Matt's best friend who can take care of an ailing mother but for whom Matt's illness is too much to handle; there are also the nurses, staff and patients at the hospital.

This book is painful, yes. Sad, yes, but sometimes you can't help but laugh. I also think that especially here in the US, as the debate about the sad state of mental health care in this country is going on, the book is a very timely read.  It is also engaging to the point where you may have trouble putting it down.  Frankly, I loved this book and whether or not it recently won a prestigious award is beside the point.  It's just plain and solidly phenomenal.