*The Book About Blanche and Marie, by Per Olov Enquist

"I think if we put all of our loves together, I mean my loves and Marie's, then an image of life itself would emerge, in the spaces in between."

The Marie in this book, a blend of historical fact and outright fiction, is Marie Skłodowska Curie, a scientist who, with her husband Pierre, discovered the elements polonium and radium, and  twice won the Nobel Prize.  Blanche refers to Blanche Wittman, who came to be Marie's assistant, after having  spent a number of years in Salpêtrière Hospital in Paris  for her "hysteria," in the care of Dr. Jean-Martin Charcot.  Blanche's "cure" was based on the rather odd belief at the time in stimulating/manipulating  women's ovaries and other lady parts.  Blanche was Charcot's favorite "performer," and the cover of this novel is a piece of a famous painting by André Brouillet that shows Blanche during one of her public "treatments." 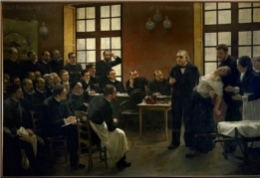 As the novel opens, Blanche, described as a "sort of torso, though with a head,"  having undergone several amputations due to her work with radioactivity, is dead, having "died happy."  She noted this fact in one of her three notebooks, colored black, red and yellow, collectively realized as the Book of Questions.  The main question Blanche seeks to understand in her writings is that of the nature of love -- her writings were meant to be a solace to "poor Marie," who, some time after losing her husband Pierre in an accident, started up an affair with Paul Langevin, a scientist-friend of the Curies. He was five years younger and married; eventually the truth came out and a huge scandal ensued that not only ruined her reputation but almost cost her the second Nobel.  Blanche notes that her own experiences will provide Marie with "the courage to face life," and will also save her from "the inner frostbite and scientific rigor that were about to kill her and her sanity."  As the author notes regarding Blanche,

"In the Book of Questions she wants to tell her story, to summarize and compare her experiences, partially from the hysteria experiments at Salpêtrière Hospital, partially from the physical chemistry ones under the guidance of Madame Curie, in order to create in this manner a healing portrait of the nature of love, which she compared to the nature of radium radiation and hysteria."

Blanche has lost most of two legs and an arm, and her Book of Questions is written with the remaining hand that also helps her move about in the wooden box in which she spends most of her remaining days.  The two women are both damaged and have suffered for science and for their passions.  Inside the Book of Questions is Blanche's reflections on her past, including her time at  Salpêtrière and her examination of her somewhat strange relationship with Charcot;  her contemplation of Marie's problematic romance is also part of  her investigation.  As it turns out, the question cannot be answered, since according to Blanche, "love is not something a person can understand;"  it is ultimately the investigation itself that becomes all encompassing and in a sense, life sustaining for Blanche up until the moment of her death.
But wait -- there's more. While the title of this book might lead you to believe that what you're about to read is  a novel of historical fiction about two women, one famous, one virtually unknown,  as  you delve more deeply you come across names and events that make you realize that in and around the stories of Blanche and Marie is a cleverly-designed work about the birth of the modern world. The new century makes its entry “with blood, with confusion, with reason, ... in an attempt to step into the dark future of humanity, " only to lose its "self assurance, its optimism about progress, its arrogance..." in 1914 with the advent of World War I.  As the author explores the timeless human forces of  love and death, healing and destroying, reason and irrationality, the little blue light of radium looms in the background as a symbol.  Marie's search for understanding the power behind this element might well be viewed as an allegory of her quest to try to understand the power behind love --  both of which contain the forces of destruction and curing alike -- a sort of double-edged sword, if you will.

I know I've way oversimplified things, and I didn't mention several things I've marked in my notes: the continuous imagery of amputation -- of things, of memories, of people;   the relationship of science to art;   the author's story of the two-headed Pasqual Pinon whose other head was named Maria and its relevance to the overall story,  and most especially the question of why people are continually drawn to forces that have the power to maim or kill. Frankly, this book could be an entire semester's worth of study on its own so there's no real way to encapsulate everything I've read here.

From a casual reader's perspective, The Book About Blanche and Marie is  rather difficult reading at times; but in spite of having to go back slowly through several sections, I actually ended up liking this novel.  It is also my introduction to this author's work, and it  took some time to get used to his style where he tends to step into his work with his own personal interjections about his characters, or with seemingly  strange observations that feel out of place at first, but which come to make sense later.  The repetition that exists in this novel has a purpose but until I got the hang of reading it, I'll admit I was a bit confused. If  you need to have a cut-and-dried sort of historical fiction that goes from point A to point B, you will not find it here. It's what I call a "quirky" sort of read, and I spent a lot more time on it than I had intended.  While a number of people absolutely loved this book, for me it was a beyond-good, not-quite-great novel. 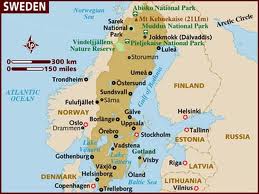