*The Feast of the Goat, by Mario Vargas Llosa

"... that’s what politics is, you make your way over corpses.”
I absolutely love works by Latin American writers.  My favorite novel of 2012 was Tomas Eloy Martinez's Purgatory;  2011 found Kamchatka  by Marcelo Figueras at the top spot.  Now here I am with Feast of the Goat by Peruvian author Mario Vargas Llosa, a story which takes place in the beautiful Caribbean nation of the Dominican Republic, and one that is definitely going on the favorites list for 2013. 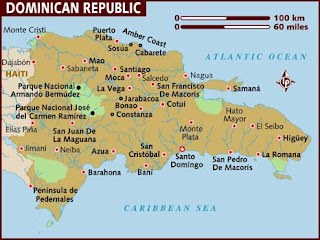 The tropical beauty of the Dominican Republic belies a dark period during the regime of dictator Rafael Leonidas Trujillo (r. 1930-61), called The Chief ("el jefe") or sometimes the "goat" in this novel, a man whose unchallenged control kept his military and government advisors in a complete stranglehold, leaving them in a state of veritable paralysis. It examines  "the spell that had kept so many Dominicans devoted, body and soul to Trujillo,"  for just over thirty years, and reveals how the structures put in place to maintain this paralyzing control didn't die off even with Trujillo’s assassination.  Not only does he control property, he controls people -- through strange tests of loyalty and other psychological measures that he employs. Everything people have -- property, wealth, position --  is theirs through the auspices of the "Benefactor;" a reality which has become so ingrained that no one dares do or say anything to screw it up. This relative peace and prosperity enjoyed by people in the Dominican Republic under Trujillo is countered with fast, brutal suppression of any form of dissidence; securing that peace cost untold thousands of innocent lives.  At the same time, in Mario Vargas Llosa's recounting, Trujillo's  control is under perceived attack: the US has placed a number of sanctions on the Dominican Republic, Catholic bishops are seen to be stirring up trouble and the situation is being monitored by American representatives there,  and if that isn't enough, Trujillo's own body is failing him.

It is important to note that while The Feast of the Goat is based on actual events, it is not a blow-by-blow account of repackaged history,  but rather, as the author himself states in an interview with the New York Times,

''It's a novel, not a history book, so I took many, many liberties. The only limitation I imposed on myself was that I was not going to invent anything that couldn't have happened within the framework of life in the Dominican Republic. I have respected the basic facts, but I have changed and deformed many things in order to make the story more persuasive -- and I have not exaggerated.''

The author employs three narrative strands that weave through each other, or as he calls them, "trajectories," to tell his story. The first  is via the return of Urania Cabral, daughter of Agustin Cabral, once a powerful member of Trujillo's staff before his ultimate downfall.  After leaving for America at the age of 14 some 35 years earlier, Urania has finally returned to face the demons that drove her away;  in the meantime she has been spending her time studying law, taking a position with the World Bank, and reading everything she could get her hands on about the Trujillo regime. As she says to her father, to whom she hasn't spoken in all of those years,

"You're in some of those books, an important figure. Minister of Foreign Affairs, senator, president of the Dominican Party. Is there anything you weren't, Papa? I've become an expert on Trujillo. Instead of playing bridge or golf, or riding horses, or going to the opera, my hobby has been finding out what happened during those years."

"What happened" is at the core of Urania's  reasons for her self-imposed exile; while she was an unwitting victim herself, suffering a terrible fate that eventually sends her away from her homeland, most of her search for answers comes from research looking back on that time. Her father can't explain it to her; he has suffered a stroke which renders him unable to speak; flashbacks reveal what Agustin is unable to tell her.  Urania's own tragedy, eventually related to two incredulous female relatives,  underscores the monster that Trujillo has become, but at the same time, it also illustrates exactly  the sacrifices willing to be made by people who enjoy his good graces.

A second narrative thread is taken up by the conspirators, including some of Trujillo's closest trusted military officers.While they lay in wait for Trujillo's car to pass by, the reasons behind their actions are revealed.  Everything has been carefully planned,  not only in terms of the assassination itself, but what is supposed to happen next -- a coup which will take out the existing Trujillistas, most notably Johnny Abbes Garcia, the sinister head of the SIM (military intelligence), and replace them with a junta with General "Pupo" Román at its head. Everyone in the group is on board, but when things go horribly wrong after the assassination, that above-mentioned paralysis kicks in as Román, himself one of the conspirators, balks and goes into his regular military general mode,  doing what is expected of him instead of stepping up and taking the reins of authority as planned.

Finally, the third voice is that of Trujillo on the last day of his life. He spends time in the past, recounting his disappointment in his sons,  his sexual conquests, and events which he's experienced during his reign --  for example the rounding up and slaughtering in 1937 of thousands of Haitians along the border with the Dominican Republic; the problems with Castro and the US; not to mention the June 14th movement and the assassination of the Mirabal sisters who dared speak out against him;, as well as his perceived enemies who've simply disappeared, many of them thrown to the sharks while still living -- all interspersed with his present.  As his body ages, he is plagued by problems with his prostate, which have made him both incontinent and impotent, a significant factor in not only his assassination, but in an earlier tragedy that brings the story full circle and highlights yet another theme of this novel in terms of the link between sex and power.
It's difficult to talk about this book and some of its symbolism without giving away the show, hence only a sketchy discussion here, but it is an excellent novel.  Even though, as noted above, the author took some liberties in putting his story together, sometimes it's difficult to figure out exactly what is fictional here simply because it is all so realistic, all so "could have happened."  There are many wonderful scenes in this book, especially when the conspirators are waiting in the darkness for Trujillo's car to come by.  Even though they are there to kill someone, they spend time talking together about their families, their lives and what ultimately became the straw that broke the camel's back and brought them to this point.  In short,  they become real people who are looking forward to different lives and who deep down really love their country.   [As an aside, I knew Trujillo had been assassinated, but still, I only took my first reading break after the deed was done, getting in deeper and deeper, unable to put the book down until I knew that he was dead.]  Another fascinating sequence of scenes takes place in the jockeying for power after Trujillo is dead, involving Trujillo's son, his brothers, and most especially Trujillo's  puppet president Balaquer, who sees this time as his golden opportunity and manipulates the action most skillfully.  Actually, the power grabbing scenes and Balaquer's solutions verged  on the unbelievable, a little too nicely and quickly tied up so as to be unrealistic.   While the depictions of torture in this book are particularly grisly and gruesome, I can only surmise that the reality of the prisoners' treatment was not too far off the mark, highlighting even further the grotesque nature of this regime where savage revenge can be had for a price. My only other issue with this novel is that while the use of the three perspectives  is a good idea, sometimes as these narratives converge it is difficult to judge present from past -- I had a couple of sessions where I had to do a bit of rereading before I figured out what was going on and was able to continue.

If you peruse the vast number of critical reviews of this novel, you will discover a wealth of symbolism lying beneath the action of this novel; if like me you're more of a casual reader and can't catch every single nuance, that's okay.  Feast of the Goat is not for the squeamish; if you're upset about yet another novel highlighting the evil that people do then pass on this one.  If, however, you are interested in circumstances that can create a person like Trujillo who can keep an entire nation paralyzed in the grip of his authority, this is a good place to start. Although helpful, even if you know nothing about the Dominican Republic or its history, it's definitely not a deal breaker -- the author makes everything extremely clear.  Most highly recommended for readers of historical fiction, and for readers of the so-called "Dictator novel" form, where writers have used their literary talents to respond to tyranny, an area I plan to further explore in the near future.