The Hangman's Game, by Karen King-Aribisala 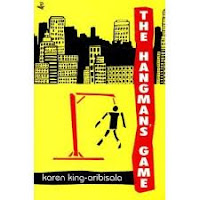 It's times like this when I wish I had turned my attention to studying literature rather than history, although history plays a pivotal  role in this novel.  Indeed, the novel might be characterized in part as a dialogue with history, but there is also so much in here in terms of the art of writing that I'm sure I missed, and as I've noted, I'm neither a lit major nor an English major, so I'll leave it to someone much more skilled in that area to decipher and analyze the symbolism and thematic concepts that run throughout this novel.

The Hangman's Game is a postmodern, metafictional novel which tackles the question of oppression and the struggle for freedom.  Although these two topics are extremely common themes in literature going way, way back, the author has put quite a different spin on them in this book, and the result makes for rather interesting reading. The narrator of the story is a woman from Guyana who is writing a novel about the 1823 Demerara slave revolt, with a focus on the main character, Reverend John Smith.  Smith had tried to convert the slaves in this area of Guyana, and for his trouble, he got caught up in the revolt, was charged with treason and he received a death sentence.  As the narrator notes, "That had made me mad. It was so unjust," and she was using the "bones of this historical account for my own story."   As part of her writing experience, she decides to visit Nigeria, where she hopes to gain an understanding of the enslavement of her ancestors, as she says,  to "live among its peoples and discover at first hand why hands exchanged silver for the likes of me," and to see for herself

"why slavery, the slave trade, occurred in the first place...why blacks sold their fellow blacks into slavery and I want to know why God allowed it."

In Nigeria, she is greeted by her contact, a university professor and lay pastor.  It isn't long until she and her contact marry, and Nigeria becomes her new home.  It is also not long until she runs smack into the realities of life under the ruler of that country, a figure known only in this book as "The Butcher Boy," likely based on Nigeria's General Sani Abacha, very well known for corruption and human rights abuses.  The novel alternates between her book about Demerara and her experiences in modern Nigeria, and as The Hangman's Game proceeds, it becomes quite clear that even though the slave revolts had occurred nearly two centuries earlier, the same sort of tyranny exists in the modern day.   In short, although both narratives are set in different times and under different conditions, there are some things that remain the same -- most especially the enslavement of people under a ruthless and cruel authority, as well as the measures taken by both societies to effect their own  freedom from political domination and tyranny.   It's what those differences and similarities say about human nature that are important to this novel, as are the concepts of empowerment and control.

The Hangman's Game is very short, but will keep you reading as you ponder the events and similarities between 1823 and  life in Nigeria under a ruthless dictator.  As far as  the "readable vs. literary" debate, the book is very approachable, but at the same time, there is a lot of wordplay and symbolism  that may escape the average reader such as myself.  Sometimes the action and the voices of the characters  in both narratives is a little overdone, and there is a lot of Christian allegory throughout the story.  To be fair, considering the religious natures of the Reverend Smith and of the narrator's husband, it would be unrealistic if Christianity did not play a part in the book; it's just not something I normally choose in my reading, so it was a bit of a drawback for me personally.  But overall, I liked The Hangman's Game, and recommend it mainly to readers of African fiction. 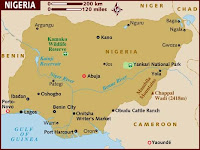