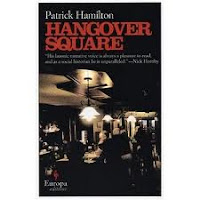 Hangover Square is only one of a long list of novels by Patrick Hamilton.  Hamilton also wrote three plays, two of which were turned into movies and may be a bit familiar:  Rope, directed by Alfred Hitchcock in 1948, and Gas Light, brought to the screen by George Cukor in 1944.  I've never read anything by Hamilton in the past, but after reading Hangover Square, that will not be the case in the future.  It was, in a word, amazing, and I can't remember reading anything even remotely similar.   The book examines one man's  tenuous hold on reality that is threatened by obsession, alcohol and illness.  It reads a bit on the noir side and would be equally good for readers who like that genre and  readers of literary fiction.

Opening Christmas of 1938, continuing on through 1939, the scene is Earl's Court, a small neighborhood on the seamier side of London. A small hotel room in Earl's Court is home to George Harvey Bone, the main character is this story.  Since his schooldays, George has had what he calls his "dead moods," where all of a sudden everything changes from normal to where "there was only himself -- his dreary, numbed, dead self."  George suffers from schizophrenia, and lately gets a "click" in his head when he's about to change. He goes into a state where it's like being at a movie where the soundtrack is missing, where people move about and do their thing but he's unaware of them. In this mode that he is surprisingly the most rational, a different George Harvey Bone, whose thoughts are clear as day.  He has trouble remembering what he was doing beforehand,  and he doesn't remember his actions or thoughts during these  dead moods when he comes out of them.  However, his main focus while in this state is trying to remember that there's something to be done -- and that is to kill Netta.

George has an overpowering yet unrequited sexual obsession with the beautiful Netta --  she gets him to the point where "he could hardly breathe or think, in which he was choked by the mist of his sensous anguish."  She, on the other hand, uses him shamelessly when she needs money, or for other self-serving purposes.  For her, George is repellent; he's a pest, the butt of her set's cruel jokes, but he buys the booze and buys her dinner.   Time after time George tries to stay away from her, but he always comes back, even after realizing the truth about Netta, and even after a low and devastating blow during a trip to Brighton that would have sent a normal man packing.  He literally cannot help himself, even though his infatuation brings him only pain, loneliness and severe depression.

When he's not in a dead mood, George is  quiet, polite and sensitive, finds solace in a white cat and David Copperfield.  Netta and her friends  out  in the bars and pubs of  Earl's Court, where life is generally based on daily rounds of excessive drinking:

"When you met in the morning, all you talked about was last night -- how "blind"' you were, how "blind" Mickey was, my God you bet he had a hangover. ("Taking a little stroll round Hangover Square" -- that was Mickey's crack.)...And when you had a lot more to drink you felt fine again, and went crashing round to lunch upstairs at the Black Hart (the table by the fire) where you ragged the pale waiter and called attention to yourselves."

George also drinks  heavily, although he's not pleased with himself and even notes that it's likely at the bottom of much of his unhappiness.  He  does the rounds of the pubs to be with Netta and drinks to mask his loneliness and pain of the hopelessness of the situation.   It's during these bouts of drinking when Netta and her friend Peter discuss their admiration of Hitler and Facism and their view of Chamberlain as a hero, views shared by many during this time period.    While wasting their days drinking,  rambling on about politics and denying the possibility of another war, George in his dead-mood time disagrees -- realizing that they had "turned their ignominious desires into beliefs."

But it's only during these dead moods  that he can cope with his obsession and make plans to escape it.  He picks up the thread of killing Netta each time, and imagines himself doing the deed and going off to Maidenhead, site of an earlier, happier time in his life.  George is not normally prone to violence, and his dead-mood episodes allows him to imagine things he would never otherwise consider.   There is no question that at some point George's divided self is going to overcome him, and  as the blurb on the cover notes, "one part of George must win out over the other, but which will it be?"  Sadly, this is but a  bare-bones outline; to give away any more would be to wreck it for others.

Hangover Square is an amazing book. While an easy book to read, it was a bit personally disquieting, not so much because of the ending but because I was so divided in my sympathies at the end.  It's one of those stories that makes you question your thinking, and I believe that the author had to have done this on purpose.  Once in a while you read one of those rare books where you're emotionally floored at the end; this is one of those.  There is absolutely nothing feel good or happy between the covers of this book, yet I was totally compelled to read it in one sitting -- it's that good.   George Harvey Bone and Netta will keep you turning pages, but in and among that story there is also a look at  social class, the interwar generation and their misguided ideologies, and the utter waste of productive, good lives as a period of peace is about to explode into a dark time of war.   I highly recommend this novel -- but don't read it while you're depressed.  It's one of my favorite reads for 2011.

posted also at the Europa Challenge Blog.
Posted by NancyO at 4:46 PM