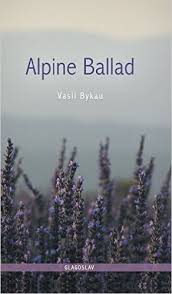 paperback, my copy from the publisher. My thanks, along with sincere apologies for not getting to it sooner.

There is something very special about this particular edition of this novel, as noted on the back cover blurb, it is


"An altruistic, philanthropic project of Glasgoslav Publications, Alpine Ballad" is coming out as a gesture of peace and a reminder to all of the human cost of wars that ransack our planet to this day."

Certainly can't argue with that. Extra cheers to Glagoslav, because the other thing that makes this edition so special is that this translation is the first not to have been based on versions censored by the Soviets.

I had no idea before reading this novel who this author was. It's an embarrassing thing to admit, but, well, there it is. There is a very nice introduction to Bykau in the intro section of this book, and as I was looking up more biographical info about Bykau, I stumbled onto a blurb for his  biography, Vasil Bykau His Life and Works by Zina J.Gimpelevich.  It says that


"The Soviet Union banned many of Vasil Bykau's novels, which often focus on the agonizing moral dilemmas faced by young officers during the horrors of war. Considered the best modern Belarusan writer and the last Eastern European literary dissident, Bykau (1924-2003) is referred to as "the conscience of a nation" for leading an intellectual crusade against Lukasenka's totalitarian regime. In exile from Belarus for several years, he was given refuge by Vaclav Havel in Czechoslovakia. He has been nominated for the Nobel Prize by Havel, Czeslaw Milsoz, and PEN."

I'll be reading his biography for sure in 2017.  For sure.  He knows his topic -- he served in the army during World War II and was wounded several times; when the war was over, he began to write.


Now on to the book.

Alpine Ballad is, on the face of it, a novel about the flight for freedom made by two prisoners in a Nazi concentration camp somewhere in the Austrian Alps after they'd managed to escape.  Four of Ivan Tsyareshka's fellow prisoners died after an unexploded  bomb goes off, leaving a nearly-impenetrable cloud of dust and a lot of chaos. Ivan takes off, knowing that there's no way the others survived although he understands that it was only due to their deaths that he now has a chance at freedom.  Alsatian dogs and soldiers are sent after him, but he's not going to give up, and eventually clears the camp area, heading toward the Alps with the plan to make it to Trieste, where he hopes to hook up with partisans.  It isn't long, though, until he encounters another escapee,  Giulia, who is in the camp as a political prisoner marked by a red triangle on her clothing.  The novel follows their journey and their hopes as they take uncertain steps toward freedom.

Now, I say "on the face of it," because there's way more than just a simple escape going on here.  Earlier I mentioned that this novel's publication is a "reminder to all of the human costs of wars," a theme that just permeates this book.  One major idea captured here  is what Bykau refers to as "Entmenschung," referring to the dehumanizing practices of the Nazis, which he says is "the most dastardly of all evil deeds on earth."  We see this idea at work throughout the novel, and it especially comes into play here as Ivan more than once has to make decisions that will require strength of spirit and an examination of his own humanity.  Ivan totally understands this concept -- as we're told, once he was put into the camps and had the opportunity to observe what was going with "the underside of Nazism," he comes to realize that "death was not the worst thing that could happen during the war."

How these ideas play out through the novel I will leave to others to discover.  The story gives Ivan a chance for reflection in the form of flashbacks, which not only help us to understand who he is as a person, but which also offers a look at life in the USSR in the 1930s, most especially the famines that killed so many people in the Ukraine.  While the journey embarked on by Giulia and Ivan is just downright brutal in so many places, this is not, as I said earlier, just another novel about an escape -- reading it that way sort of lessens the impact and importance of what the author has to say here.

another one I recommend. Serious food for thought in this novel. 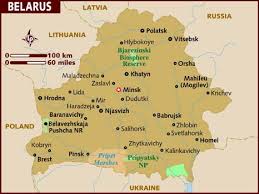