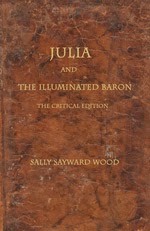 I just love discovering little historical tidbits about people when I'm looking things up.   According to the introduction to this novel, Sally Sayward Wood (1759-1855) was born in York, Maine, and was a poet and quite a prolific novelist. Julia and the Illuminated Baron (hereafter Julia) is only one of four books that she wrote.  After the death of her first husband, she took to writing because it "soothed many melancholy, and sweetened many bitter hours."  In fact, she wrote all of her novels in between husbands, remarrying in 1804. Mrs. Wood came from a very prominent family, and during the American Revolution most of her relatives sided with the British.  Her father, Nathaniel Barrell,  was an adherent of the unpopular Sandemanian religion (brought to America in the 1760s), which affirmed that it was one's "Christian duty" to obey "one's temporal ruler," (in this case the King) a stance that pegged him as a target during the uprising caused by the Stamp Act, leading to a stunted political career and the burning down of his church.  Her mother Sarah was the daughter of a rich Loyalist and prominent judge, and was seen as "a great belle of the time," as well as a "leading favorite of the village."

Wood's background might seem like no big deal to most people, but in the introduction to Julia,  the writer notes that "Instances such as these," i.e. the burning down of the Barrell family's church that happened when she was six,  may have "shaped" "the novel's dread of revolt and popular uprising."  This seems logical to me since the novel ends with the French Revolution and a brief statement of the respective aftermaths of the two main aristocratic families in this book.  It also has as its central villain a member of the Illuminati - not the Illuminati of Dan Brown's Angels and Demons, don't go there; rather, here it is portrayed as an evil society of atheists and amoral rogues responsible for the French Revolution; it is also an order with which the American public was familiar at the time because of the publication of a book by John Robison called Proofs of a Conspiracy against all the Religions and Governments of Europe. This book spread throughout "New England pulpits and pamphlets through 1798 and 1799," as a propaganda tool,  used by those who supported the Federalist cause against  those who felt that America should be less centralized and more of a democratic republic.  It also played to the fears of those who were concerned about the intrusion of  foreign "radical" ideals.

The actual Julia of the title is a young, beautiful woman who not only turns heads where ever she appears, but she gives off vibes of being perfectly virtuous, honest, and selfless to such a degree that everyone who meets her is enchanted by her in the truest sense of the word.  This is, of course, a credit to her mother, who never sent her away to school, but educated her at her humble home in France where the two live with Julia's grandfather on a farm.   Her mother, it seems, had promised her a great revelation of some sort, where "every mystery will be cleared," and in which Julia would be "acknowledged" for what she really is. It seems though that  Julia would just have to wait to find out what her mother meant, because she left one day, leaving Julia behind, and never returned. True to her mother's earlier admonition to  never leave the cottage, the ever-faithful Julia is set to obey, and probably would have continued to stay there forever but for the death of  her grandfather who lived there as well.  It is at his death that this story truly begins, when Julia is in great distress and Camilla, Countess de Launa just happens to show up.  After spending some time with her, and recognizing that surely Julia is living beneath her proper station, she convinces Julia that she'd be better off living with her, so off they go after the grandfather's funeral.

Julia and the Illuminated Baron follows Julia's rather adventurous life after arriving to live as the companion to the Countess at her lovely villa.  She meets Colwort, a young Englishman,  and falls in love, pledging to remain true to him always no matter what. Yet the two are separated soon after they meet, when Colwort must retrieve a female cousin in distress from America and reunite her with her family in England. His voyage and subsequent stranding in America  is only one obstacle in the lovers' path; before all is said and done, Julia will undergo some strange adventures that will take her away from those who love her and leave her in the clutches of evil.

Gothic elements are woven quite nicely into this work, making Wieland look rather tame as a "Gothic" novel in comparison.   There is the crumbling castle, a secret and debauched society with dastardly plans, guests who are in fact prisoners, a hint of incest, people locked away in underground oubliettes, and a family mausoleum that may or may not be the site of some supernatural happenings. In one moment that just screams Gothic,  Julia secretly (but with help with kind servants of her captor) makes her way from the room where she's being held out to the property's crypt.  There, a coffin lid is opened and Julia  finds herself staring into a face that is her own, and if that is not horrific enough,  it falls apart, crumbling to dust, while she watches.  I would also comment here that in my opinion, these same elements that put Julia into positions that threaten the very virtue she is known and widely praised for also offer her the space to act independently as a true Gothic heroine.  She may not act with all of the propriety expected of her, but in surpassing the obstacles which she must overcome, her virtue nevertheless remains intact:


"Almost inevitably, the gothic heroine is intended to be the best at everything she does; she is sometimes so seemingly perfect as to appear self-parodying. The standards of what this perfection entails have changed over the years as societal expectations of women fluctuate; a modern gothic heroine is valued more for her strength and outspokenness, while an earlier heroine might be prized for her purity and silence."

Obviously, we can go with the "earlier heroine" as outlined here. Continuing:


"Regardless, however, she is often more intelligent, more beautiful, more accomplished, and more resilient than any other woman--and in the earlier novels - more chaste. These are the characteristics within the control of the young woman. There are, however, outside factors surrounding the behaviour of the gothic heroine. By the very nature of the genre, these women are faced with huge obstacles—from depraved monks to bigamist husbands--particularly in their quest to maintain their perfections. These obstacles are nearly always overcome with grace and ingenuity."

Considering the likelihood that this particular novel was aimed at a female reading audience, there are some pretty strong statements being made here at a time when women's roles were still highly uncertain within the context of the new America.  At the same time, there are other women in this book who also deal with a number of obstacles and come through them with soiled and tarnished reputations, failing to meet society's (read patriarchal) expectations. Reading their stories,  it doesn't seem all that far fetched that the author is also trying to provoke some sympathy for choices that women under pressure often had to make that put them in that position.

There's much more going on under the surface here that I could bring up, but suffice it to say Julia and the Illuminated Baron ultimately goes to show that virtue is stronger than vice and will triumph in the end.  However,  to arrive at that understanding the reader must follow a long, windy road so full of  implausible coincidences and a lot of moral didacticism.  Each subplot is way too obvious as to its outcome; in short, there are very few surprises on the horizon. In spite of its shortcomings, however, it is a fun little read for anyone who may be interested in examples of early American gothic writing.