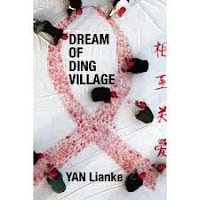 
There have been a number of times I've finished a book where it's stayed in my head for a long while.  This novel is one of them. I actually finished reading it a couple of days ago and it's still bothering me, not just because of the subject matter (which is disturbing enough), but because it's based on fact. Not only is it based on fact, but according to the author, he really toned down the content of his novel so that it the book would not be censored in China, but that effort didn't work. And though he cut a lot out of the story, after reading this article which discusses some of the things he left out, I was a bit apprehensive about what was behind the novel he didn't publish.  So off I went to the internet to do some research and became even more disturbed. But this is a story that needs telling, and the author delivers clearly delivers the message. The fact that it's based on real events makes it even more compelling of a read.

The dusk settles over a day in late autumn. The sun sets above the East Henan plain, a blood-red ball turning the earth and sky a deep shade of crimson. As red unfurls, slowly the dusk turns to evening. Autumn grows deeper; the cold more intense. The village streets are all empty and silent.

The silence is intense. Yet even in the absence of voices or sound, Ding Village lives on. Choked by death, it will not die. In the silent shades of autumn, the village has withered, along with its people. They shrink and wither in tandem with the days, like corpses buried underground.

The grass upon the plain has turned brittle and dry. The trees are all bare; the crops have withered. The villagers are shrunken inside their homes, never to emerge again.


And thus the book begins. The place is Ding Village, Henan Province. The time is the 1990s. Some ten years earlier, Ding Hui, one of the more prominent villagers, went into the blood buying and selling business looking to get rich, as his son notes, by becoming "a blood kingpin." The blood business was not limited to Ding Village, nor to Henan Province; it was happening in villages all over China and it was sanctioned by the government. Dream of Ding Village is a tale told through two voices: that of Ding Hui's now-dead son, who offers up a narrative of events that happened after the business came to Ding Village, and through the dreams of Ding Shuifeng, father of Ding Hui, also known in the book as Grandpa or Professor Ding. While in many books dreams might take a back seat to the action, here they are not to be discounted. The epigraph of this book bears witness to this fact: there are three dreams from the Old Testament, especially  that of Pharaoh, whose dream was wisely interpreted by Joseph not only as to meaning, but also to a course of action.  In Grandpa's case, his dreams lead him to the realization that everything that happened in Ding Village started with Ding Hui. There's more connected with these dreams, but I'll leave it to the reader to tackle.

Ding Village was a small place, less than 200 households, about 800 people.  Since the communes were officially disbanded, people were back to tilling their own soil and growing their own crops, raising their livestock, and most of the households were poor. Ding Hui had an idea to become a blood merchant, or in the local parlance, "bloodhead," in order to get in on a government-sanctioned business in which the bloodheads offer to buy people's blood. They would then sell it, making a lot of money during the blood boom of the late 80s and into the 1990s. Hui had trouble urging the villagers to sell their blood, so in order to convince them that they could not only make a bit of money for themselves but that it was good for the village as a whole, he took some people to a model village that showed that there was prosperity in blood selling. There, the homes were made of red brick and tile, with new household appliances, furniture, silks and satins.  Women walked around with fresh meat and vegetables that they'd got for free from the village committee.  Young men had leisure time, spending it playing ping pong and chess.  After that visit, the Ding Villagers

"looked down at their smooth, unscarred arms and exclaimed: 'What fools we've been, to waste all this!' They patted their untapped veins and muttered: 'What the hell, let's sell our blood. What do we have to lose?"

and so began the selling of blood in Ding Village. Not only did bloodheads set up blood banks all over, when the operation went mobile, Ding Hui saw a chance to make more money by setting up his family home as a blood bank to make it more convenient for the villagers. But the problem was that the bloodheads didn't take time to screen the sellers' blood, nor did they often change needles or tubing, and they often stored blood in any jar, bottle or container at hand.  Eventually, people came down with what they referred to as "the fever," but in reality what they had contracted was HIV. Some cases progressed to full-blown AIDS. An epidemic swept through the village, leaving many dead, more dying.  Through all of this, Ding Hui managed to escalate his own fortune and political power, never taking responsibility, never arranging care or even coffins: when the government authorities told him that the villagers with AIDS were entitled to a free coffin, he took it as another money-making opportunity and put them up for sale.  When that business grew, he had another scheme to exploit the dead: matchmaking for those who had already died, offering his services and arranging marriages of dead relatives for the families left behind. The only thing he offered the sick and dying of Ding Village was free cooking oil and firecrackers to celebrate Chinese New Year. Ding Hui serves as a symbol for the morally-bankrupt authorities who jumped on the money making and personal wealth bandwagon, leaving little room for caring about human life, even family.

The central character however, is not Ding Hui, but his father Professor Ding, the caretaker at the village school, who tries to adjust to his changed world as best as he can.  When he convinces those who are dying to live together in the school as equals in a co-op style of life, sharing their resources, two of his nephews see a way in which to exploit the situation for personal gain and take over things there. They institute rules that seem to hearken back to the Cultural Revolution; for example, those found guilty of "extra-marital sex, hanky-panky and lewd behavior" faced the risk of having "fever-infected blood poured all over them."  Instead of any kind of sympathy for the sick and dying at the school, there's only a show of power backed by threat.

For me, the novel looks at the aftermath of the blood-selling business and its tragic consequences, but it is also a vehicle for criticism of a government that would allow this tragedy to happen and then turn its back on its people.   Never do any of the authorities at any level offer medical care of any sort for these people; once they've contracted the disease they are left to fend for themselves. Families suffered, the village as a whole suffered, and nowhere does anyone step up to take responsibility.  It also examines the exploitation of the situation in terms of money, power and personal gain, even as innocent people are dying in an epidemic of an incurable disease.  Yan Lianke spent three years undercover, working as an assistant to an anthropologist who, according to the dustjacket blurb, was studying a "small village decimated by HIV/AIDS as a result of unregulated blood selling."  While some parts were a bit on the romantic side, possibly even a bit melodramatic, the overall book was amazing.  As far as the translator, she did a wonderful job. I haven't read the original, obviously, but there were now obvious errors in how the story flowed and no interruptions in the reading as far as ear-grating phrasing that made me cringe.

I'd never heard of this book prior to scoping out newly-published books by Chinese authors, but after reading this, I can definitely recommend it. There are also several wonderful, more powerful reviews of this novel out there, and if you're interested, several news websites that discuss China's AIDS epidemic.  It's a wonderful book even if the subject matter is difficult.
Posted by NancyO at 6:06 PM