now this one I really like: Man Tiger, by Eka Kurniawan 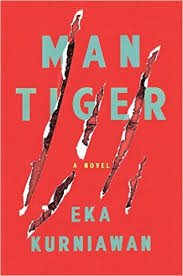 “There is a parallelism between me and Margio…In Indonesia we keep our anger, we repress our anger, but in the end…the tiger comes out, and we don’t know how to handle this tiger.”
-- Eka Kurniawan, as quoted in The Economist


Man Tiger is just flat-out amazing, which is probably one reason it's been listed for the Man Booker International Prize for 2016.  I'm not someone who buys or reads a novel simply because it's turned up on some list (some prize nominees have actually turned out to be not my particular cup of tea),  but I was intrigued by the synopsis and I knew I had to read it.  I was not disappointed -- au contraire -- I became the embodiment of the cliché about being glued to the story.  Not only does this story move back and forth through time to get to the core of this tale, it also incorporates local folklore and mythology to help in doing so.  It's a novel a person can read not just as the story of a crime, but also as a story about Indonesia  viewed through a number of different perspectives, one that may help explain the author's quotation that begins this post. What is behind much of this anger is there in the novel, something I'll leave for others to discover. The book is also an incredible example of storytelling -- I am not exaggerating when I say that  this is a novel that I could not put down.

Intriguingly, Man Tiger begins with a vicious crime, about which the news spreads quickly throughout the small Indonesian coastal town where this book is set.  It comes as a shock that Margio (20), has killed Anwar Sadat (the older victim).  Margio was well known to everyone in this small Indonesian coastal town, and  no one had pegged him as a particularly violent person.  In fact, the only bad thing anyone could come up with about him was that he had been known to steal chickens.  Even these, though, belonged to his father, and it was widely known that the theft was done "out of spite." But Margio had indeed murdered Sadat in a most vicious and brutal manner,  by biting through his jugular.  While it's true that "People attacked with their teeth, particularly when women fought each other," death by biting just didn't happen.  Machetes, swords, yes -- but not teeth.  The crime itself was not premeditated; Margio says that


"The idea came to him all of a sudden, as a burst of light in his brain."


"He spoke of hosting something inside his body, something other guts and entrails. It poured out  and steered him, encouraging him to kill."

In his cell, Margio makes a statement "calmly and without guilt" that it wasn't really him who had killed Anwar Sadat, but it was "a tiger inside my body."

To make the appetite-whetting very brief here, the rest of the novel goes back into time to explore exactly why Margio did what he did.  At least, that's the easy explanation of this story, which explores people tied together (and often trapped) by tragedy and by the past.  Even the tiger (which is actually a tigress - more on this in a moment), is  linked to Margio's family past through a line of patriarchs.  According to the village storyteller :


"many a man in the hamlet had a tigress of his own. Some married one, while others inherited a tigress, passed down through generations"

It so happens that Margio's grandfather


"had one from his father,  which before had belonged to his father's father, and so on right on up to their distant ancestors."

According to the storyteller, the tigresses "lived with their owners and guarded them against all dangers."   Margio had been curious about it since childhood, but his grandfather didn't want to talk about it citing Margio's age and the fact that he "couldn't possibly tame such a savage animal." The tigress "came out of their bodies to attack," in times of great danger, but Margio's grandfather warned Margio that "If a man couldn't control his beast, it could turn so violent that nothing could restrain it once enraged."   Interestingly (and with reason, as it will turn out, but I can't really say anything here), the tigress skips a generation in Margio's family -- his father is bypassed but she came to Margio early on, "white as a swan or a cloud or cotton wool."   The question really is one of why it emerged so fully and ready to strike when it did -- and that's the key to unlocking this novel on both levels.

A few things more and I'm gone, all of which I won't expand on, but which I'll leave for others to discover.   First, in terms of  what some readers are calling "magical realism," I look at this book more as being set within a culture that lives side by side with the supernatural or with folkloric/mythological elements. There are genies, people observe specific rituals for different reasons, superstitions ("when a crow perched on a roof, it meant there would be a death in that house"), dreams, gods, goddesses everywhere. There are also the many ghosts of the past that surface throughout this book, which struck me because clearly here, the past continues to haunt these people.  Second, the author here is sympathetic toward the women and children in this book  who, because they are under the domination of the men in control of their lives, often end up trapped in situations over which they have little or no escape. Extrapolating all of that into a bigger picture might start offering a clue as to why Indonesia is still angry.  Third -- oh, never mind, just go buy the book, because it is just downright fantastic.
Posted by NancyO at 1:17 PM