book one, booker prize longlist 2015: The Chimes, by Anna Smaill 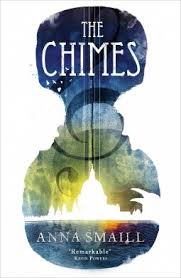 
"Out of dischord's ashes, harmony will rise."

If ever there was a novel that left me completely torn in my reaction to it, it's this one.  It is written in a unique style that left me floored in a good way, and there were several individual scenes that just blew me away, one in particular that I'll mention briefly.  The other side of that coin is that to me the originality of the writing doesn't really disguise the fact that the plot turned out to be a bit familiar, so much so for me that there came a time where I could already figure out what was going to happen at the end.  And that's such a shame. I was really invested in the story and in the main characters right up until the point where I thought, "well, jeez...I know how this is going to come out."

The Chimes takes place either well into the future or in an alternative London.  Which ever you'd like to choose,  society there has come to a point where there is no written word (known as code, which can be seen here and there but not understood),  where a group known as "The Order" rules, and where an instrument called "the Carillon" is played every day on a certain schedule.  At Matins the populace hears "Onestory," which the main character understands as the "burden, the constant truth beneath everything," which musically relates how things came to be the way they are because of the "Allbreaking," or the event that created the division between the past and present. Then some time later at Vespers comes "Chimes," the purpose of which I'll leave it to others to discover.  Oh yes. One more thing.  In this London memory, both individual and collective, does not exist; people still have "bodymemory" but the past is lost.  Anything before is "blasphony;"  the Order ensures the lack of past memories so that society functions only in the present.

The Chimes is the story of a teenaged boy named Simon, who leaves his home in Essex because there's something he needs to do in London.  An orphan, he carries with him his bag of memories. Upon his arrival he makes his way to where he thinks is the place to go, but is sent away.  He makes his way to the river where he meets a group known as the Five Rover pact, who prospect for pieces of "mettle" called "The Lady."  The Lady is then sold so that the pact can purchase necessities; from the market it goes to The Order for its own purposes.  Inwardly Simon struggles to remember his past, but in a society where yesterday is totally forgotten each day, it's not easy. He does have his bag of objectmemories, giving him little bits of insight,


"that's where you keep the pictures of what happened, stored in scraps and oddments salvaged from passing days.  When I hold them, the objects, the pictures come up. My whole life is in my bag. Bits of my childhood. Pieces of the last days on the farm. Everything I ever thought important enough to keep."

but the next day starts everything over again.

It is when he hooks up with this pact that Simon will meet Lucien, who sees something unique in Simon, and a very special friendship develops between the two that will have consequences for the future. That's all I'll say about the plot because in this case, telling is spoiling.  There is one scene that I absolutely loved that really brings the big ideas of this novel to the forefront, taking place after Simon and Lucien leave the city in search of an elderly woman living in an old house overflowing with things people have entrusted to her so that memory is not entirely lost. It turns out to be a very poignant scene, where memories are both good and bad; the woman is one of the few who can recall other people's memories through their objectmemories.


Obviously the big idea in this novel is the importance of memory, both individually and on a larger, societal basis. In many ways, the themes of memory, harmony, and cohesion reminded me of  Kazuo Ishiguro's The Buried Giant. Unlike that book, or frankly, any other I've ever read however, the author uses a unique way to tell her story, and that is through the ingenious and original use of music as language, and her use of musical terminology. As just one example,


"Lucien is very still now, but his eyes are moving smoothly. He's looking up and down and to the sides in a way that seems like he's testing them. He blinks: lento, lento, then presto."

Music recalls the paths through the "Under," beats become important for helping to guide the way to and from places; the city itself is "talking in music." The pact has its own musical codes; music is also used by The Order for communication to all, both in terms of the regular routines mentioned above and for signaling to the public, as for example when Simon and Lucien are in hiding and being sought.  It is such an innovative touch and despite what other readers have said about taking a long time to adjust, I had no problem at all -- it was easy for me to settle in pretty much right away. Gimmicky, maybe a bit, but to me, it was a unique form of expression at work here.

If so far it's pretty obvious that this book is very different and in many ways unique, why would I be bothered by it?   It wasn't long past the midpoint of the novel where something clicked  and I realized I've been down this road before not just once, but many times before. It was sort of disappointing because while the writing style was so original, in terms of the much bigger picture the framework of the story was not.  While there's much to be said about the originality of the setting, the characters, the centrality of the emphasis on music and other aspects unique to this novel,  the fact is that as the direction of the story itself started to become clearer, I kept thinking that this was all starting to sound very familiar.   So I'm left torn here: I loved the writing, the overall atmosphere and feel of her London, and I became quite invested in her people.   At  the same time, however,  the feeling of déjà vu and the fact that I knew the barebones of what was coming  was very disconcerting and a bit offputting, to say the least.   I was left thinking that originality of the writing should be matched by an original story framework and well, in my opinion, that just wasn't the case.

From what I can see, aside from that initial shock of getting past the author's unique, musically-focused writing style, reader responses have been generally positive.  So maybe my issues are just mine, but I walk away with the feeling of  probably not being as quite enthralled with The Chimes as I maybe might have been otherwise.

Email ThisBlogThis!Share to TwitterShare to FacebookShare to Pinterest
Labels: 2015, dystopia