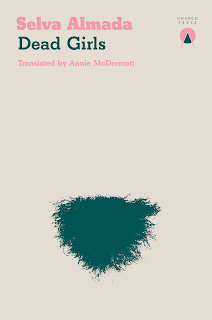 9781916277847
Charco Press, 2020
originally published as Chicas muertas, 2014
translated by Annie McDermott
146 pp
paperback
I read this back in November but have reread it in the meantime, and it was even more powerful the second time through.  Dead Girls is described on the back cover as being a work of "journalistic fiction," defined as

"a form of nonfiction that combines factual reporting with narrative techniques and stylistic strategies traditionally associated with fiction,"

used here to great effect to tell a story of three femicides that occurred over a short, six-year period in the 1980s, during which time Argentina was "celebrating its return to democracy."  The author's first exposure to femicide was at the age of thirteen, when as she says, a "dead girl crossed my path," although she also reveals that it was earlier,  during her childhood in a small town in Argentina's interior, that she came to sense that "as a girl"  she was safe nowhere, and that  "all the responsibility for what happened to us was laid at our feet ... it was always your fault."   Not even the family home, "the protective family space,"  was safe, since violence could happen there as well.  That dead girl crossing the author's path was Andrea Danne (19),  who had been murdered in her own bed; the other two women whose stories she examines are Maria Luisa Quevado (15)  strangled, raped, body dumped,  and Sarita Mundin (20), a young mother whose body was discovered washed up on a riverbank.   As one might guess, this is not an uplifting story, but it is one that needs to be told.  Now. Today.
Dead Girls chronicles the author's investigations into the deaths of these three women, whose murderers were never brought to justice.  Over the course of three years she meets and talks to their friends, family members, or to anyone who might have known anything about what had happened to them.  While some are willing to talk, in many cases she is met with silence and evasion.  She also combs through newspapers, reports, archives, while at the same time, reflecting on her own childhood and realizing that the topic of violence of women "was always there."  She remembers and discusses  conversations  about women in the neighborhood who were beaten by their husbands, or who were controlled by the men in their lives  to the point where, for example, wearing high heels was not allowed "because they were for whores," or  the wearing of make-up was forbidden.  As Ms. Almada says, these were discussions "grown women" spoke about "in whispers," while her mother talked about them "loudly, indignantly," before being told to be quiet (when children were present)  in code:

"Careful, there's laundry hanging up ... as if saying those things were like saying dirty words, or worse, as if they were a source of unimaginable shame."

While Dead Girls focuses on "three small-town girls murdered in the 1980s," their stories are set squarely within the wider context of  violence against women as she goes on to offer the names and brief stories of others who had met the same fate at the hands of men, as well as the  well-entrenched misogyny and commonplace violence that exists throughout the small towns in Argentina's interior.  This is not, as she also reveals, a new phenomenon, citing an account in a book that "catches her eye" about the case of a Polish girl from the 1950s who had the misfortune of having a boyfriend who was a "possessive, jealous and violent man."

In her Epilogue, before listing the names of femicide victims who died over the month's time  since the "new year began,"  the author writes that

"In that time, at least ten women have been killed for being women. I say at least, because these are the names that appeared in the papers, the ones that counted as news"

leaving the reader to wonder about the ones who didn't count as news.

As the back-cover blurb says, what she's written here is a "clear-eyed, multi-faceted account that has global resonance." While I recognize the huge importance of Selva Almada's book, at the same time, it's a very difficult book to read on an emotional level.  While reading it, I couldn't help  thinking of Fernanda Melchior's Hurricane Season  -- in both books the authors offer a look into the economic and social conditions in these small towns that help to feed that violence, but also acknowledge  that crimes against women are all too often marginalized by the police or the politicians who have the power to change things but allow these crimes to continue.

It's a tough book, but so worth it, and it's one I can very highly recommend.  I can also recommend Charco Press, a small but ultimately awesome publisher.