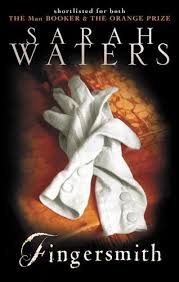 It's not often I read a 500-plus page novel and manage to finish it over the course of a weekend, but Fingersmith is just the sort of book that enables that to happen.  I picked it up late Friday night and suddenly it was Sunday afternoon and I'd turned the last page.  Then I ran upstairs and grabbed my dvd of the BBC adaptation, because I wasn't quite ready to call it a day with this story.

And what a story it is! I really can't go into much detail because this is such a twisty novel that to tell would be to spoil.  It's so twisty, in fact, that I got to the first major surprise and did a huge gasp nearly making me choke on the almonds I was eating at the time.  I remember at the time thinking "that's f***ing brilliant!" but as it turns out, there were more twists to come.  The plot is about as nefarious as it gets and quite frankly, while it's not my favorite Waters novel (that's a tie between Tipping the Velvet and The Little Stranger), it had this way of lifting me from where I was back into Victorian England and to shut out the rest of the modern world while taking me there.  Okay - that's majorly cliché, but well, it is what it is.

Dustjacket material:  Fingersmith begins in the locksmith's shop at Lant Street, "in the Borough, near to the Thames." It's a poor part of London populated by thieves.  As Sue Trinder says, "We were all more or less thieves, at Lant Street," and Lant Street has been her entire world since she was a baby. She had been raised there  by a Mrs. Sucksby who was a "baby farmer," and Mrs. Sucksby was the only mother she'd ever known.  She is totally devoted to Mrs. Sucksby -- as Sue notes, "She had been paid to keep me a month; she kept me seventeen years. What's love, if that ain't?"  Sue is seventeen when one day a visitor, Dick Rivers aka "Gentleman" arrives at Lant Street with a proposition that will involve Sue in a big way.  It seems that Rivers has made the acquaintance of young and naive Maud Lilly who lives in the country with her uncle, for whom Rivers is doing a bit of a work on the uncle's collection of books. Rivers has learned that Maud stands to inherit a huge fortune when she marries.  The plan is for Sue to go to Maud as her personal maid, gain Maud's trust, and to help convince Maud to marry Rivers.  He will then get rid of Maud by stashing her safely into an insane asylum, and once Rivers has control of Maud's fortune, Sue gets a big chunk of the cash for her troubles. Sue, who's never been away from Mrs. Sucksby, isn't sure, but since the money will be a good way for her to repay Mrs. S's kindness, she decides she'll do it.

That's absolutely all I'll say about the plot because the joy of this novel is in the many twists and turns this story takes once Sue arrives at the Lilly home to help set Rivers' plan in motion.  It is an absolutely, beyond-delightful novel that as I said earlier, totally engulfed me from the beginning.  Yes, there is a ton of detail here, some of which could have been left out or pared down and yes, some of the material verges on Victorian-novel cliché, but in this case, I was too deeply wrapped up in the story itself to care, reflecting back on these issues only afterwards.  It's a page-turning novel done in Victorian style  (Wilkie Collins, Le Fanu and Dickens all came to mind immediately), and while the plot is so twisted, it's really the people here that are the main focus. And oh my gosh - Sarah Waters can write people so very well.  She can also channel Dickens very nicely in her descriptions of London streets and slums, making it no wonder to me at all that Fingersmith was nominated for the Booker Prize in its day -- seriously, I would have voted for it had I been a judge that year.

Lovely book -- my advice: forget anything critical, go into it just for the story, have fun with it, and stay away from any spoilers.  Readers like myself who are very much into older works will love it for the atmosphere; readers like myself who love Sarah Waters' novels will definitely want to read  it for her ability to lift you out of where you are while reading it. It took me long enough, but I'm so happy I finally decided to take it off my shelves and  read it!