Hunters in the Dark, by Lawrence Osborne

"Karma swirled around all things, lending them destinies over which mere desire had no control. It made one's little calculations irrelevant."

I was recently given a copy of the American release of this book by the publisher, and after picking it up and starting to read, it dawned on me that oopsie, I had already bought a copy from the UK.

So here's the info on the American release of this novel, which is actually quite good, very well written, and one I'm highly recommending: 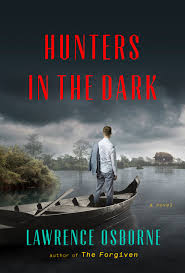 I have to laugh at the difference in blurbs for this novel between the American release and the British release.  The UK blurb calls it a "taut tale reminiscent of the nightmares of Patricia Highsmith..." and the US blurb says that book is "Filled with Hitchcockian twists and turns."  Neither blurb is quite accurate, and I had originally thought that Hunters in the Dark was a crime novel but that isn't exactly correct either.  In fact, it's rather a difficult book to pigeonhole, but as it turns out, it is one I happened to like very much.

The main character in this novel is Robert Grieve, a young (not quite 30) British schoolteacher from a small village who realizes that his life is pretty much a dead end.  In a bit of despair he travels to Thailand, wondering if he'll actually ever go back.  While he has some sporadic contact with his parents (in whose eyes he doesn't measure up), he is contented with being alone, drifting along with the flow.  The opening of this book finds him in a casino in Cambodia, where he parlays his leftover savings into a couple of thousand in winnings.  Winning such a large amount of cash is just the first, but very important link in a chain of complex events that befall him and others on his periphery, beginning with an introduction to American expat Simon Beaucamp.  Robert's driver Ouksa warns him against Simon, saying that he has a bad feeling about the guy, but Robert fails to heed his advice and winds up in a bit of trouble. I won't go any further than that re his time with the American, because it is the beginning of everything that's going to happen next and some things are just better left unsaid.  Eventually though, Robert ends up in the capital of Phnom Penh, where he decides he should give English lessons to make money, and meets the beautiful Sophal, whose wealthy, upper-class father hires him to be her tutor. A stroke of fate (or perhaps more appropriately given the theme of this  novel, karma) puts Robert in the path of a policeman named Davuth, who was an executioner and a torturer during Pol Pot's horrific regime, and who now seems to have some urgent business involving Robert, who fails to heed yet another warning (this from Sophal) because he's so "beautifully ignorant."

Karma, fate, and luck/chance are the foundation of this novel, and being in Cambodia thrusts young, unbelieving, logical-thinking Robert into a world where ghosts, spirits, omens and signs are as much part of the landscape as are the ruins at Angkor Wat. To further underscore that point, the author occasionally brings into our view things like bats taking off into the air as one huge colony, prayer flags moving in the wind, fear in a roll of thunder and trees that house spirits.  And Although Pol Pot's genocidal regime had ended nearly thirty-five years earlier, the Cambodian setting allows the author to examine how this particular past still hasn't been forgotten in this country -- it continues to have an effect on people like Davuth, for example, who has been troubled by ghosts ever since he was a kamabhipal under Pol Pot. But most importantly, it is a place where people believe that

"karma swirled around all things, lending them destinies over which mere desire had no control. It made one's little calculations irrelevant."

This one statement says so very much about what is happening in this book, but I will leave it to others to discover exactly how. I could so easily go on and talk about other things, for example, the "devastating spectacle" of the dominance of "Western ideas and moods" in Cambodia and the horrific impact they had on Cambodia's future, but I really think I've said enough at this juncture.

Getting into the story does take some time, but my advice is to relax. There is a great payoff awaiting patient readers -- not so much in terms of plot, but moreso it's all about what's happening  around the action in this novel.  I suppose you could read it just for plot but that would be such a waste -- this is an incredibly beautiful, haunting book, and now I am eager to hunt down others by this author.  My advice -- as soon as it comes out in the US in January, get yourself a copy.  It will be one of the best buys you've ever made.