I suppose I sort of lost track of my main reading objective for March, which is still 19th century American novels, but I spent the month with some incredible books, so it's okay.  Now I'm going to get serious again and get back into Hope Leslie, by Catherine Maria Sedgwick, which I've barely touched.  So far, it's pretty good, and takes the reader away from the main colonial cities and off into what was considered the frontier at the time, complete with Native Americans and personal hardship.  What got in the way of my goal, one might ask? Well, here's the rundown.
literature:*Kelroy, by Rebecca Rush
The Rosie Project, by Graeme Simsion
Song for an Approaching Storm, by Peter Fröberg Idling (thoughts coming soon - in the meantime, I felt it was an excellent novel. Kudos to Pushkin Press for publishing it.)
crime:A Rage in Harlem, by Chester Himes
The House of Wolfe, by James Carlos Blake
Swimming in the Dark, by Paddy Richardson
Harriet, by Elizabeth Jenkins (obscure crime writer project)
The Big Clock, by Kenneth Fearing
The Daughter of Time, by Josephine Teynonfiction:Ghettoside: A True Story of Murder in America, by Jill Leovystrange/weird/horror fiction:Nazareth Hill, by Ramsey Campbell The Feast of Bacchus, by Ernest Henham ( haven't posted about this book yet, but it's exceptionally good)
The Golem, by Gustav Meyrink (another not discussed -- coming soon)
Currently reading:
nf: Shocking Paris: Soutine, Chagall and the Outsiders of Montparnasse, by Stanley Meisler
crime: A Cold Coming, by Mary Kelly
literature: Hope Leslie, by Catherine Maria Sedgwick
--- other stuff

---
that's my March - looking forward to getting back on track in April.

This story may have just been the Mommie Dearest of its day.  Forget evil stepmothers -- the mother in this book is about as nasty as they come. If ever there was a time when I wanted to reach into the pages of a book and slap someone, it was while reading Kelroy, by Rebecca Rush.  The truly awful thing is that I can actually understand why she did what she did, given the context of the time.

Kelroy is set in Philadelphia, and begins with a woman (Mrs. Hammond) who finds herself in bad financial straits when her  husband dies. Emigrating earlier from England to America, he had become quite successful and tended to live well beyond his means, having more of a reputation for wealth than actual wealth. After his death, his wife took stock, and paid off the debts he'd left behind (no more than "two thirds of the property which she held,"), paid off what she owed and found herself left with six thousand pounds and the house she lived in. Mrs. Hammond was all about appearances, and feared poverty more than anything else in life.She rented out the house and moved to the country, where she bought a "small, but elegant residence," seemingly overwrought with grief, but in reality, she was cutting back on expenses to use her money to realize a plan designed to marry off her daughters to wealthy, upper-class husbands who will provide for them (and for herself) in an upper-class lifestyle. Her daughters' looks were her insurance policy against poverty --  and everything she did from her husband's death onward had one single purpose -- to make the best, most advantageous matches for  daughters Lucy and Emily.  She has them educated at home by a governess and "masters" from the city, but she also has her own lessons to deliver:


After four years, Mrs. Hammond makes the great "sacrifice" for her daughters and moves back to the city, where they move about  in upper-class circles.  Elder daughter Lucy by now is vain, very much into the idea of money, and thinks little of anyone but herself.  Her dear Mamma has circulated rumors here and there of her great fortune, although the expenses involved in getting her daughters ready to be married off to suitable husbands (elegant parties, dinners, dresses, the best of everything more designed for appearances sake)  has left her little ready cash to her name.  Lucy is chosen by a young English Lord Walsingham, and finding him beyond suitable, a marriage is arranged.  Emily, on the other hand, falls for one of Walsingham's friends, a young poet named Kelroy, definitely not the kind of man Mrs. Hammond believes she can profit from through marriage to her daughter.  After Emily falls hard for Kelroy, the rest of the novel follows our Mommie Dearest,  who refuses to stand idly by and watch her own plans go awry.

To me, Kelroy serves in large part as a commentary on social class and on class pretensions. For example, there's one very nicely-composed scene depicting an interaction between Emily and her friends and a nouveau-riche, formerly working-class family named Gurnet.  The Gurnets have absolutely no concept of gentility, yet when Emily and friends come to visit, they try to impress upon Emily's party that they too know their manners, are educated in the arts, respect nice things -- and in doing so accomplish exactly the opposite.  Mrs. Hammond herself has a place among the upper class simply because of her dead husband's fortune, but because of his debts, finds herself in a position where she has to fight to keep her status.  Her daughters are her investments and are treated as such by her.  All of the money she's put into the girls and,  more importantly to her, into  keeping up the appearance that she actually belongs in this class, has led her into debt and a decline in her cash situation and the shopkeepers are literally knocking at her door. In all fairness, after giving this book some consideration, considering how limited her prospects and those of her daughters would have been if she had not gone to such great lengths, I can sort of understand her reasoning.  On the other hand, one would think that Lucy's marriage to an English lord, and a later change in her own fortune would have relaxed Mrs. H's  grip on Emily's future, but it does not turn out that way -- and this is what makes her truly a greedy and beyond-hypocritical villain in my eyes.

I loved this book and I am grateful that it's been reprinted and made available.  My copy is a part of a series of publications called Early American Women Writers from Oxford University Press and there are many others in this series I want to get my greedy little hands on. Of all of the books in my American novel survey so far, this one has been by far the easiest to read and to understand, and even though it was published in 1812, there's so much going on in here which, in my opinion, has some relevance for our own time.  Definitely recommended.
Posted by NancyO at 11:30 AM No comments: 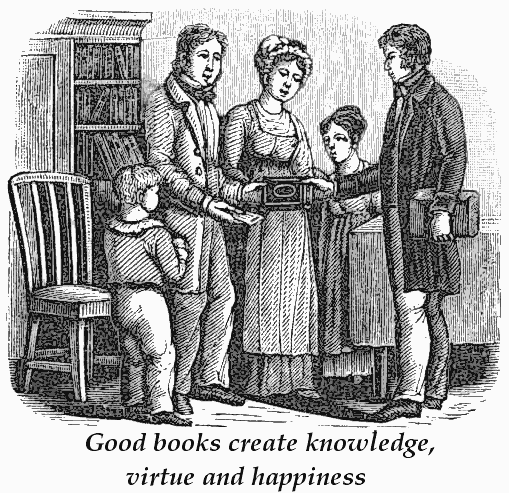