"Be faithful, spy well, or you die."
Weighing in at only 181 pages, Casino Royale is the first installment of the 14-book James Bond series.   The Bond of this novel will probably come across as a bit of a surprise to some readers who are familiar with his larger-than-life, superspy cinema persona, which oozes sexiness, indestructibility, confidence, and machismo. Here he comes across as more of a misogynistic, flawed individual, prone to self doubt and a bit of introspection at times. In short, he tends to be  more human than the often over-the-top movie portrayals lead us to believe.

Casino Royale begins rather slowly, with Bond on assignment to take down Monsieur Le Chiffre, a man with adopted name whose aliases include "variations on the words 'cypher' or 'number'." He is a Soviet agent (remember -- this was written in 1953 and the Cold War is already on fire) entrusted with fifty million francs to finance a Communist-controlled trade union in France, a group which could prove troublesome as a "fifth column" in case of war with the USSR.  Le Chiffre, it seems, has parlayed the trade union funds into several incredibly bad investments and is currently on the edge of financial disaster.  Bond's masters believe the only way to bring him down and destroy his standing with the Soviets is to bankrupt him entirely; but to do this they need someone who can outdo him at cards -- it seems that the enigmatic Monsieur Le Chiffre has come up short and is using his skills at  baccarat to try to make up his losses.  Bond is the perfect man for the job; he goes to the casino at Royale-Les-Eaux to watch Le Chiffre and then take him on at cards.  One serious complication has arisen: agents from SMERSH, an acronym for Smyert Shpionam, "death to spies," have caught wind of Le Chiffre's activities and are on his tail, unbeknownst to Le Chiffre.  Bond's going to need some help -- along with Mathis, a French intelligence agent, and Felix Leiter of the CIA, London sends Vesper Lynd, a sultry, sexy woman whose involvement is at first resented by Bond.  This is not going to be easy -- it isn't long until there's an assassination attempt, and that's only the beginning of Bond's problems.


I must say I was a bit surprised to find a more human, fallible Bond characterized here, one whose take on women is that

"women are for recreation. On a job, they got in the way and fogged things up with sex and hurt feelings and all the emotional baggage they carried around."

This Bond also is capable of questioning the rightness of what he does, capable of reflection in a world where "the villains and heroes get all mixed up." As he notes,

"...the country-right-or wrong business is getting a little out-of-date. Today we are fighting Communism. Okay.  If I'd been alive fifty years ago, the brand of Conservatism we have today would have been damn near called Communism and we should have been told to go and fight that. History is moving pretty quickly these days and the heroes and villains keep on changing parts."

At the same time, this Bond becomes the sum of his experience -- I won't say why or how, but he evolves from a man who loses himself in love into a hardhearted, cold, licensed to kill 007 with a single-minded mission, to "go after the threat behind the spies, the threat that made them spy." 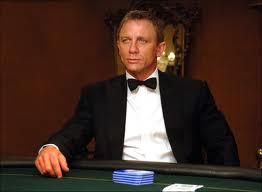 The events in Casino Royale set the foundation for Bond's long career and if you're looking for something lighter, it's  actually quite a good read.  It starts rather slow, but picks up quickly.  In today's vast array of high-tech spy fiction, this novel may seem a bit old fashioned with little action, but more interesting here is Bond's character.  I'll also mention that a large number of reviewers were somewhat disgusted with Bond's attitudes toward women and the very apparent sexism that runs throughout the book, but hold on.  This book was published in 1953, not 2013; it's highly unfair to judge the mores (read mor-ays) of a particular time or of the writer and hold them to today's standards.  IMHO (which is indeed humble), giving a book a 1 or 2 star rating on the basis of its treatment of women some 60 years ago is just wrong.

The whole time I was reading this book, I was amazed at how this short little novel morphed into the action-packed thriller it became in 2006.  If you're a spy fiction person, like I am, it's a definite no-miss; if you've seen the movies and want to know how it all started, this is a great resource.
Posted by NancyO at 10:47 AM