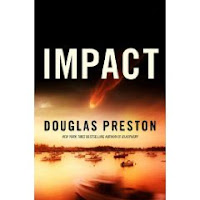 My review of this book should be subtitled "I feel like the Lone Ranger here."

I have bought and read every single book this author has published, and those that he wrote with Lincoln Child. I have to say that this one was not the best in the bunch ... I was so disappointed. I know, I know, I'm once again swimming against the tide of people who really loved this book, but, well, that's just how it is. And before you accuse me of book snobbery, I will say in my defense that I read this kind of stuff all of the time and normally can have a fun time with it, so it's not the subject matter -- I just thought this was definitely not one of the author's best moments.

As the story begins, two things are going on. First, A young woman, Abbey Straw, is out with her friend watching the heavens at night and the sky lights up over Maine's coast. Abbey believes that what just landed was a meteoroid (not meteorite)and after checking e-bay, she realizes that there are people who collect these things and will pay her a hefty chunk of cash. She does some research, realizes the thing did not land in the ocean as previously thought, and off she and Jackie go in search of their fortune. Second, a young scientist at NPF (the National Propulsion Facility) in Pasadena receives a hard drive in the mail from a now-dead associate.  As the action gets going, CIA operative Wyman Ford (a continuing character in Preston's novels) is asked by the President's science advisor to go to Cambodia and locate the source of some radioactive gems that have been coming into the country lately, worried about the possibility that the radioactivity might possibly fall into the hands of terrorists. Preston proceeds to interweave all three stories into one big one, and the action doesn't let up until the end.

Normally, I can sit back and enjoy a bit of far-fetched escape reading, one of my guilty pleasures in reading life, but this one was way too over the top plotwise and the ending was just silly. Although the premise was interesting (I bought this book, so obviously the premise caught my eye) many of the action scenes were just highly implausible, and overall I felt like this story was flat. Normally with this kind of thing, I can at least get into it a little, but not this time.

But then again, everyone else who's written a review seems to really like it, using superlative adjectives to describe it, so maybe it's just me. Try it for yourself.
Posted by NancyO at 9:11 AM